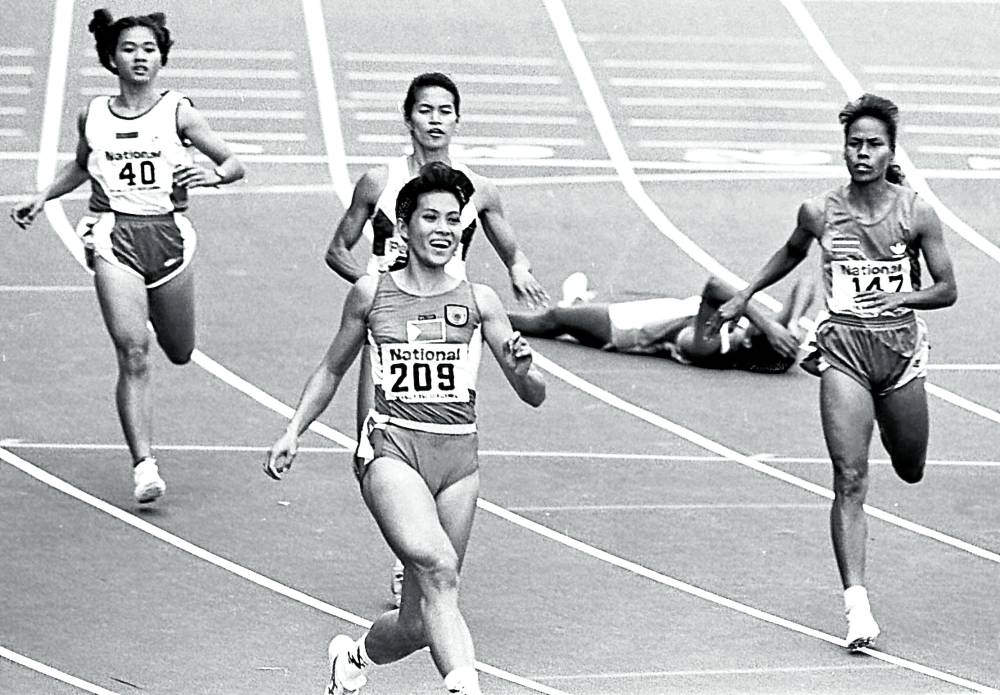 Lydia de Vega-Mercado (No. 209) flashes her trademark smile after ruling the women’s 100-meter dash finals in the 1991 Southeast Asian Games. Behind her is Elma Muros-Posadas, who calls the late track heroine “my idol.” —ERNIE U. SARMIENTO

Usha, a four-time Asian Games gold medalist, took to Twitter to bid farewell to the Filipino track star and express her deepest sympathy to the family.

“She lost her life race to breast cancer but will always be remembered as a champion of life. My deepest condolences to her family!”

Lydia’s daughter, Stephanie Mercado de Koenigswarter, responded to Usha’s tweet, thanking her for the friendship that they built after facing each other in several competitions.

On the track, the biggest rivals; but great friends in life. Thank you @PTUshaOfficial for your friendship with my mom🙏 https://t.co/77IWbHutuj

“On the track, the biggest rivals; but great friends in life. Thank you @PTUshaOfficial for your friendship with my mom,” said the former volleyball player.

De Vega and Usha were on top of the Asian track and field in the 1980s. The Filipino beat the Indian in their first race in the 100-meter dash of the 1982 Asian Games.

In 1985, Usha bounced back winning five gold medals in different events in the Asian Championships in Indonesia, while de Vega only brought home one bronze.

A year after the 1986 competition, De Vega defeated Usha in the 100m and 200m of the Asian Championships in Singapore.

De Vega, who retired in 1994, was diagnosed with breast cancer four years ago and went through several medical procedures, including brain surgery last month.