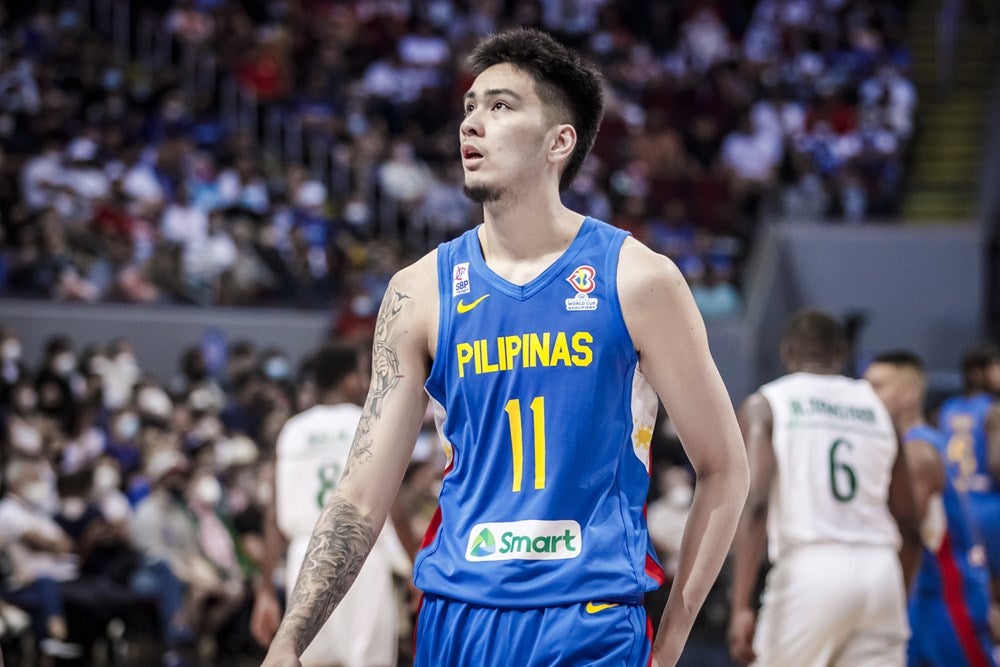 Gilas Pilipinas center Kai Sotto during a game against Saudi Arabia in the Fiba World Cup Asian Qualifiers at Mall of Asia Arena. Photo by Fiba

MANILA, Philippines — Kai Sotto insisted he has to be better as he heads back to Australia after a solid double-double in Gilas Pilipinas’ 84-46 rout of Saudi Arabia in the Fiba World Cup 2023 Asian Qualifiers on Monday in front of a 19,829 home crowd at Mall of Asia Arena.

The 7-foot-3 center joined hands with NBA star Jordan Clarkson to lead the Philippines, which regained its winning ways in the fourth window of the qualifiers.

Sotto posted 16 points, 13 rebounds, and four blocks but the 20-year-old center was still far from satisfied with his performance.

“I have to be better… I never had a perfect game, and I think I didn’t play good enough. But, we won, so a win is a win. So I’m happy with that,” said Sotto after shooting 4-of-10 from the field and hitting 8-of-11 from the free throw line.

After playing two games in the August window, Sotto, who went undrafted in the 2022 NBA Rookie Draft, said he is flying back to Australia to join the Adelaide 36ers in preparation for the 2022-23 National Basketball League season.

“I’m going back to Australia tomorrow, to go back to my team, Adelaide, and we’ll go back to training,” said the Filipino prodigy, who is bracing for his second NBL season with the 36ers.

Though Sotto is going back to Australia wanting more from himself, he still considers his latest stint with Gilas a successful one.

“It’s a good win. I’m glad we ended it strong. This might be the last time that we 13 (players) will be together including Carl (Tamayo). So we treasure it. Our experience all in all was really fun, I learned a lot and I consider this a success for us,” he said.

Read Next
Bongbong Marcos watches Gilas’ game vs Saudi Arabia
EDITORS' PICK
Hidilyn Diaz wins only gold missing from her collection
Shop smarter with vivo’s big 12.12 holiday deals
The vivo Y02 is now available in the Philippines for only PHP 5,299
How not to retire as an ex-president
House energy committee chair Arroyo bats for cheap electricity
Lawmakers eyeing more changes in Maharlika plan
MOST READ
Don't miss out on the latest news and information.