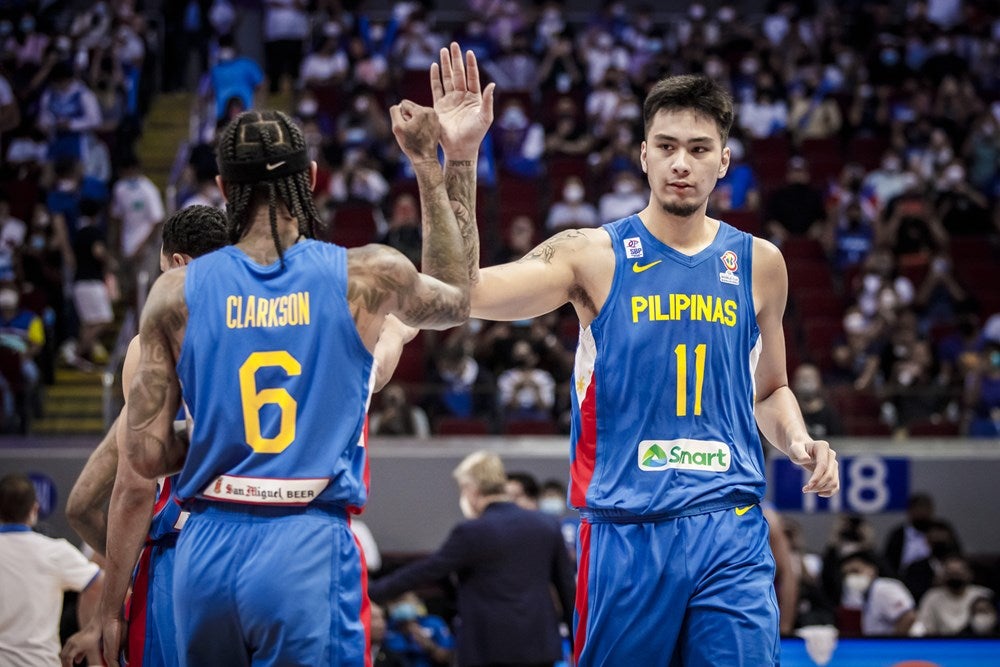 MANILA, Philippines—Jordan Clarkson feels Kai Sotto is just scratching the surface of his potential and he hopes the 20-year-old center continues to pursue his dream to become the first homegrown Filipino to play in the NBA.

Clarkson and Sotto were teammates with Gilas Pilipinas in the fourth window of the Fiba World Cup Asian Qualifiers where they shared the court for two games.

The two displayed great chemistry, even conspiring on several highlight plays with the 7-foot-3 Sotto on the finishing end of the Utah Jazz star’s alley-oop passes.

The 2021 NBA sixth man of the year, who scored 23 points off five triples that went with five rebounds and six assists in his first home game, formed a potent combo with Sotto, who notched 16 points, 14 rebounds, and four blocks to roll past Saudi Arabia, 84-46, on Monday at Mall of Asia Arena.

“He’s very skilled, catch the ball, he can space the floor, he can put the ball on the ground, make plays, he can shoot it as well, space the floor. The sky’s the limit for him,” said Clarkson of Sotto during the post-game press conference.

Sotto is honored to have played with Clarkson, whom he learned a lot from as he continues to chase his NBA goal despite going undrafted in the 2022 NBA Draft.

“It’s just being a pro, and we all know how good he is. He’s at the highest level, he’s an elite NBA player. So I learned a lot from everything he did for our team and for the country,” said Sotto.

Clarkson, who was 22 years old when he was drafted 46th overall by the Washington Wizards before trading him to Los Angeles Lakers for cash considerations, encourages Sotto to keep going despite being left out in the recent rookie draft.

“For him, just stay with it. Not to get down, give up, or anything. I think he has a bright future, he’s young, he’s just learning, get in the weight room, get stronger, put some time in as he grows into the player he is,” said Clarkson, one of two active NBA players with Filipino roots along with Jalen Green.

“He just gotta continue to put the work in. Keep making strides in his career path. I think he’s 20 years old. I didn’t make it to the league until I was 21, 22 years old so he has time to go over.”

After the pair showed flashes of what could be a dynamic duo for the Philippines in the Fiba World Cup next year, Sotto is leaving the country for Australia on Tuesday, while Clarkson is set to return to the United States in preparation for the upcoming NBA season.

The 30-year-old guard is proud to see Sotto spread his wings in Australia’s National Basketball League, where the young big man will continue his professional career in his second season with the Adelaide 36ers.

“I think he’s going to Australia right now to grow and play against pros at a young age, really learn the game so I’m proud of Kai, what I’ve seen, when I first saw him coming out of high school or whatever and then seeing him now, he’s taking steps in the right direction. I’m happy for him and can’t wait to see him continue to grow,” Clarkson said.

As Sotto rejoins the 36ers, he is also set to get a taste of legitimate NBA competition in October when they face the Phoenix Suns and the Oklahoma City Thunder in a pair of preseason games.