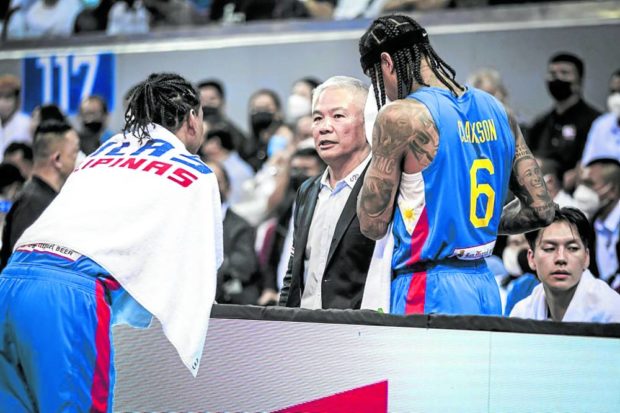 Throughout his latest visit to his mother’s birthplace, Utah Jazz star and Gilas Pilipinas ace Jordan Clarkson has been in a giving mood.

He signed autographs, took part in donation drives and indulged fans with his splendid play in the games against Lebanon in Beirut and Saudi Arabia.

On Monday night, however, on the heels of a resounding victory and home debut this cage-crazed nation’s fans have been long yearning for, Clarkson decided to be on the asking end.

“I think we need to change our actions and show love and nothing but peace here,” he said.

Clarkson, a Texas-raised guard who traces his lineage to Bacolor town in Pampanga, came into the defense of national coach Chot Reyes, who was showered with boos early into the Philippines’ 84-46 crushing of the Saudis in a Fiba (International Basketball Federation) World Cup Asian Qualifiers (WCAQ) match at Mall of Asia Arena earlier that night.

“[F]rom what I’ve seen in these last days, it’s some b_llsh_t,” he went on. “But yeah, he’s our coach, he’s one of us, he works hard, he put this together. From what I’ve been hearing, he walked away from the game, you know, and came back; he ain’t gotta deal with none of this shit.”

Reyes, who was put back by the national basketball leaders on the Gilas saddle last February, has been under fire for a spate of international debacles which includes a gut-wrenching loss to Indonesia in the Hanoi Southeast Asian Games that ended the Philippines’ 33-year stranglehold of the gold medal.

The 59-year-old mentor also dealt with the fury and vitriol of critics both on the internet and in the Philippine Basketball Association. Last July, a signature drive for his resignation made rounds on social media. Calls to wear black during the games of TNT Tropang Giga, his club in the local pro league, followed shortly after.

Reyes is well aware of the flak that has been hounding him. He even called himself the “most hated man in Philippine basketball,” shortly after receiving this 6th PBA Press Corps Coach of the Year award back in June.

The ire was anchored on the fans’ frustration over the removal of coach Tab Baldwin, Reyes’ pal who led Gilas to several scintillating performances in the earlier windows of the WCAQ, the Asia Cup qualifiers in Pampanga, along with a pair of gallant stands in the Olympic Qualifying Tournament in Serbia.

Not helping was Reyes’ involvement in two of the notorious moments in Gilas history: The Philippines shooting at its own goal during the Asian Games back in 2014, and the melee incident that involved Australia in Bulacan four years ago. Joining Clarkson’s tenor were his teammates Kiefer Ravena and Dwight Ramos, who both slammed the crowd’s reception of Reyes.

“We’re all together as one and I really didn’t appreciate that. It wasn’t a good way for us to start the game. So if you’re gonna support us, support all of us because we’re all in one team,” added Ramos, the young program cornerstone who also turned in some unforgettable moments during that night’s duel.

Manny V. Pangilinan, chair emeritus of the national federation and Gilas’ biggest patron, reached for the same refrain: “Sad to hear the reaction of our crowd to coach Chot. Dwight put it well—grateful indeed for your support but please, support all of us.”

Clarkson admitted that he knows little about the events that preceded Monday night’s rather unsettling moment, but stressed that all the ire directed toward Reyes—and his family—is far from warranted.

“I think we all should support him and support what he got going on because you know, in this next World Cup, whatever we got, we all gotta have each other’s back and support each other going through this so that’s all I gotta say about that,” he added.

Clarkson won’t be available for the national cage program when it continues its buildup for the World Cup via the Qualifying windows, as he will be neck-deep in backstopping his NBA club by then. The Philippines will have a handful of games—against Jordan and Saudi Arabia on the road this November, and then versus Lebanon before Jordan once again in February next year.

But he assured that Reyes will have his support, through and through.

“[T]his is all that we envisioned, honestly,” said Clarkson. “This has all been a blessing and you know, for somebody to get rocks thrown at him—for putting all this together, and bringing me, Kai [Sotto], his dream, his vision that he had, coming back to the game—is like I said, b_llsh_t.” INQ