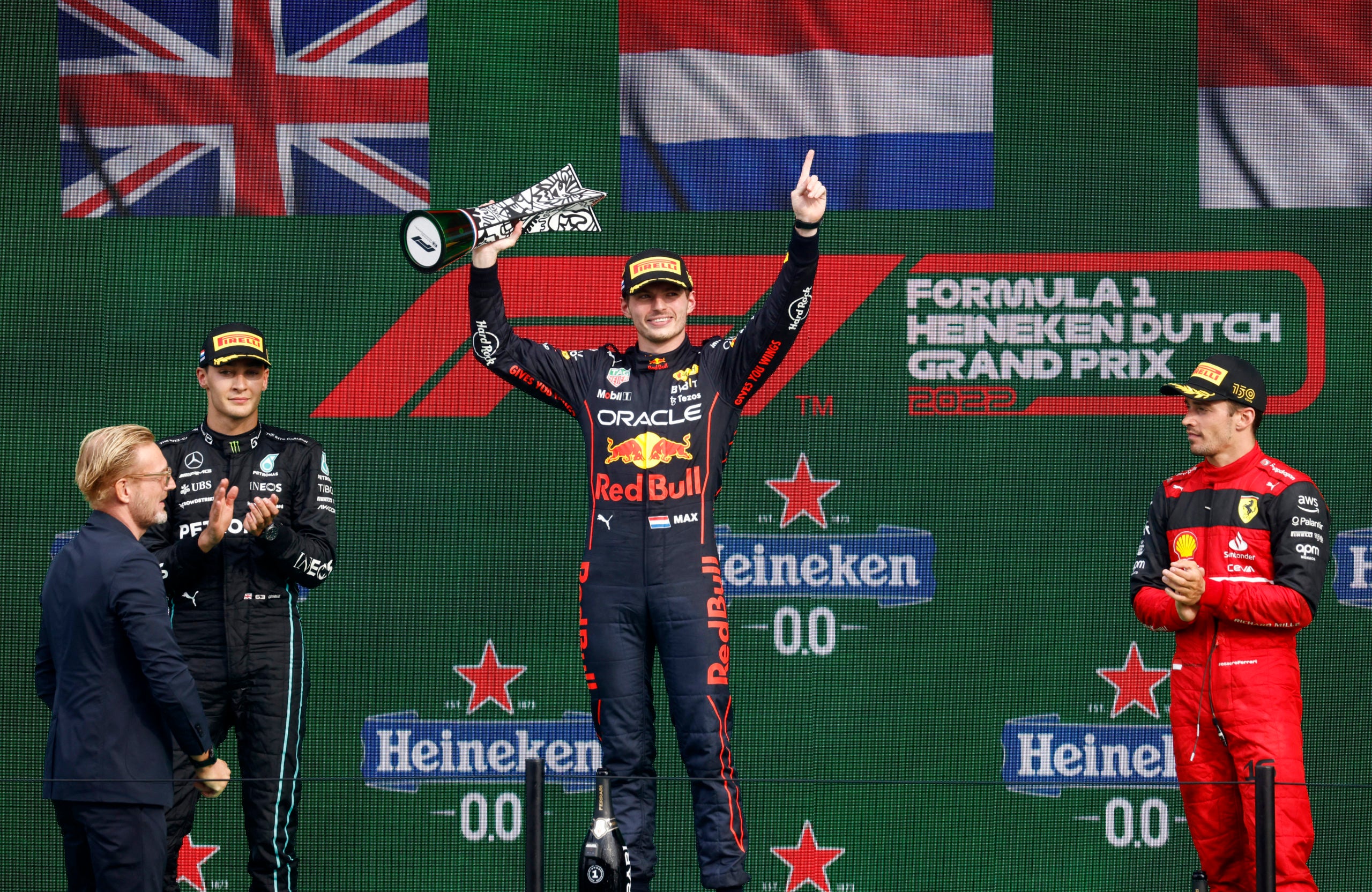 ZANDVOORT, Netherlands-Red Bull’s Max Verstappen won his home Dutch Grand Prix from pole position for the second year in a row on Sunday to send the fans wild and his Formula One world championship lead into triple figures.

He added a bonus point for the fastest lap as George Russell finished second for Mercedes and Ferrari’s Charles Leclerc completed the podium at Zandvoort.

“They threw everything at us but we made the right calls,” said Verstappen over the radio as he celebrated his fourth win in a row, and 10th in 15 races to surge 109 points clear at the top.

“It’s always special to win your home grand prix, this year I had to work for it even more,” he added as the grandstands full of orange-shirted fans — most of the 105,000 in attendance — went into party overdrive.

Leclerc and Verstappen’s Mexican teammate Sergio Perez are tied on points in second place overall, with the Ferrari driver ahead on wins with seven rounds remaining, but Verstappen’s second title looks a formality.

In the constructors’ standings, Red Bull has 511 points to Ferrari’s 376.

Mercedes’ seven-time world champion Lewis Hamilton was fourth, the Briton fuming at his team after leading a race he might have won but for the timing of safety cars and a tire strategy that left him on slower tires than rivals.

“I can’t believe you guys,” he said over the radio, with expletives filling the airwaves.

The Mercedes drivers had run one-two for the first time this season, after rivals made their first pitstops, with the pair on an initial one-stop strategy while Verstappen planned for two.

A virtual safety car period triggered by AlphaTauri’s Yuki Tsunoda changed that, however, with Verstappen taking a cheap pitstop and Hamilton complaining his hopes of winning had been “stuffed”.

Tsunoda had stopped by the side of the track on the 44th of 72 laps, complaining a wheel had not been fitted properly.

Told it was safe, he got going again and returned to the pits for a tire change and seatbelt check before being sent back out — and stopping.

The full safety car was deployed on lap 55 when Alfa Romeo’s Valtteri Bottas stopped just before the last corner, with Verstappen pitting for soft tires and Russell calling for the same but Hamilton staying out on the mediums.

Verstappen seized the lead again at the re-start and did not look back, with Russell and Leclerc powering past soon after and triggering a heavily bleeped radio exchange.

“We timed it really well out of that last corner into the banking. You could see the draft was quite strong and we got ahead. It’s incredible to win again,” said Verstappen.

Perez finished fifth with Fernando Alonso sixth for Alpine and Lando Norris, who had forced his way past Russell at the start, seventh for McLaren.

Ferrari’s Carlos Sainz ended up eighth after starting third and finishing fifth on the road, relegated due to a five-second penalty for an unsafe release in the pitlane.

The Spaniard had already been dropped from third to sixth by a pitstop bungle that even team principal Mattia Binotto described as a mess.

Sainz came in after 15 laps for his first stop with the mechanics having only three tires to put on the car and the driver kept waiting for more than 12 seconds before he could leave.

Perez, who pitted after Sainz and left before him, drove over a Ferrari wheel gun left out of place by a distracted mechanic.

Read Next
Tennis: Gauff into US Open quarterfinals for first time
EDITORS' PICK
How not to retire as an ex-president
Shop smarter with vivo’s big 12.12 holiday deals
House energy committee chair Arroyo bats for cheap electricity
Hidilyn Diaz wins only gold missing from her collection
The vivo Y02 is now available in the Philippines for only PHP 5,299
Lawmakers eyeing more changes in Maharlika plan
MOST READ
Jovit Baldivino, ‘Pilipinas Got Talent’ winner, dies at 29
LPA enters PAR, to likely strengthen into tropical depression in coming days – Pagasa
Andi Eigenmann, family in Manila for a quick visit; Ellie dines with grandma Jaclyn Jose
11 Filipino imports named to Japan B.League Asian All-Star team
Don't miss out on the latest news and information.