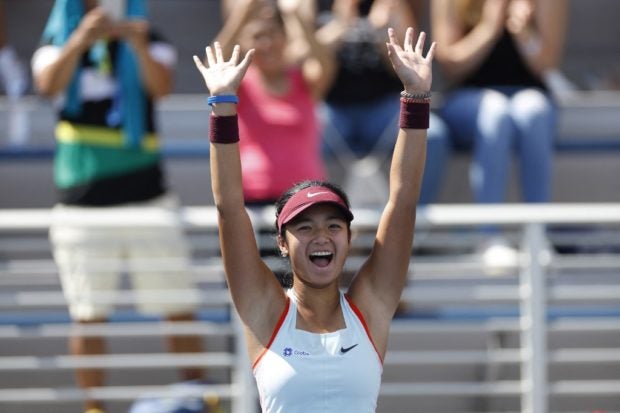 Alexandra Eala of Philippines celebrates after defeating Lucie Havlickova of Czech Republic during their Junior Girl’s Singles Final match on Day Thirteen of the 2022 US Open at USTA Billie Jean King National Tennis Center on September 10, 2022 in the Flushing neighborhood of the Queens borough of New York City.  (Getty Images via AFP)

Eala became the first Filipino to win a tennis Grand Slam singles title after defeating World No. 3 Lucie Havlickova of the Czech Republic on Sunday (Manila time) in New York.

Senators Christopher “Bong” Go and Sonny Angara extended their compliments during the Senate Committee on Sports hearing on Monday.

“What a great start for us in the Philippine sports,” Go, chairperson of the Senate sports panel, said during his opening remarks on Monday.

Go shared that the Senate has a proposed resolution, which he co-authored, congratulating Eala.

(Of all the greats that played in tennis, Alex Eala was the first to win the grand slam in juniors. So congratulations. She brought a big honor to the country.)

Cayetano thanked Eala for being an inspiration to the country and the youth.

(Thank you for the honor you gave the country. Long live, champ!)

(Congratulations, Alex Eala for winning and making history as the first Filipino to win the US Open Junior Girls Singles! The whole nation is proud of you! Long live!)

(Thank you for the honor you gave the country.)

After clinching the Grand Slam singles title, 17-year-old Eala will return to the professional circuit for the rest of the year.