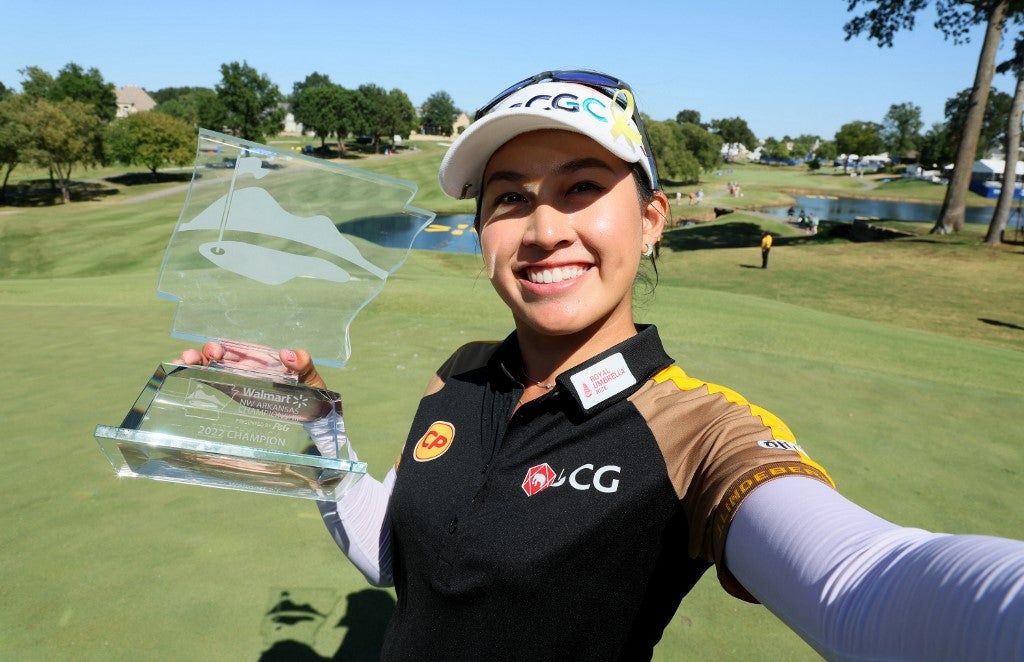 Atthaya Thitikul of Thailand pretends to take a selfie while holding the winner’s trophy after winning the Walmart NW Arkansas Championship Presented by P&G at Pinnacle Country Club on September 25, 2022 in Rogers, Arkansas. Andy Lyons/Getty Images/AFP

Thailand’s Atthaya Thitikul rolled in a birdie putt at the second playoff hole on Sunday to edge Danielle Kang and capture her second LPGA title at the NW Arkansas Championship.

Atthaya, 19, started the day with a one-shot lead over Japan’s Yuka Saso and had four birdies in a final-round 68 for a 17-under par total of 196 at Pinnacle Country Club.

Meanwhile, Kang, playing her third tournament since June after treatment for a tumor on her spine, surged up the leaderboard with a seven-under-par 64, capped by a hole-out eagle at the 18th.

Both parred the opening playoff hole, the par-three 15th.

Atthaya found the fairway at the next, the par-four 16th, while Kang was just right of the fairway. Atthaya landed her second shot some 12 feet from the pin while Kang’s approach bounced through the putting surface.

The American’s putt from the short greenside rough raced past the hole and Atthaya calmly stepped up to drain the winning putt.

Kang was far from disappointed.

“I’m just really proud that I’m even here,” said Kang, who broke down in tears during her post-round television interview. “Obviously I wanted to win, but these are, like, tears of joy.

“I mean, there was part of me that I didn’t think I would ever play again or contend, but here I am. I’m not that far off, and I’m happy about that.”

Atthaya, who matched a tournament record with a 10-under par 61 on Friday, said playing against Kang ratcheted up the pressure.

“I just feel playing with Danielle was kind of tough, because she’s a great player, won a lot on the LPGA tour,” she said.

Atthaya, who won the Ladies European Thailand Championship in 2017 as a 14-year-old amateur, is projected to rise from fifth to fourth in the world rankings on Monday.

She’s the fourth player with multiple victories in 2022, along with three-time winner Jennifer Kupcho and Minjee Lee and Brooke Henderson who have both won twice.

She’s also the fourth player from Thailand to earn multiple wins on the LPGA tour, a list led by Ariya Jutanugarn with 12 titles.

South Korean Chella Choi finished third, following up her second-round 63 with a 65 for 197. Thailand’s Pornanong Phatlum was fourth on 199 while Saso faded with a five-over par 76.