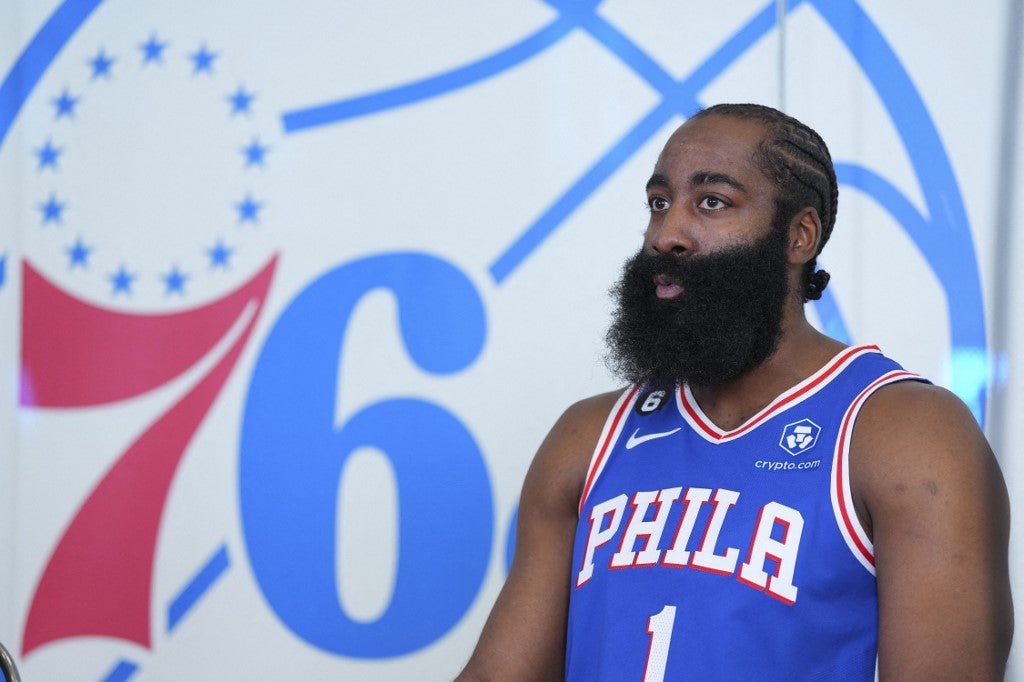 James Harden #1 of the Philadelphia 76ers looks on during media day at the 76ers Training Complex on September 26, 2022 in Camden, New Jersey. Mitchell Leff/Getty Images/AFP

Fighting mental weight and physical pounds was almost too much for James Harden to handle the past two seasons.

“Mentally,” Harden said Monday at media day with the Philadelphia 76ers, “it was very, very difficult for me. A lot of dark moments, which I’ve never really went through.”

Hamstring injuries stalked Harden through his tenure with the Brooklyn Nets and crept up following the February 2022 trade to the 76ers. Harden spent the offseason getting right. He said he focused on muscle tone and muscle mass with significant results that were visible in the contrast of his physique at the dais.

Asked how much weight he shed, Harden said “One hundred pounds. Tweet that.”

Seated alongside Joel Embiid on Monday as the team opened training camp, Harden said he spent many hours training with Georges Niang, who allowed multiple teammates to set up at his house for easier access to the group’s workouts.

James Harden on the weight he lost this offseason

Physical conditioning should do more than keep Harden healthy, he said. The goal is “win as many championships here as we can” and the route to get there is “defense.”

Embiid echoed the notion that the Sixers are established as an offensive force but want to lock in on stopping upper-echelon contenders.

“Obviously our pick and roll was almost unstoppable,” Embiid said of his partnership with Harden. “Our focus is on defense. We aim to be the best defensive team in the league.”

Embiid was considered the NBA MVP last season by some voters — Nuggets center Nikola Jokic won the award for the second consecutive season — but said his goal is to be Defensive Player of the Year because of the impact it has on the team’s results.

It’s that mentality that led Sixers president Daryl Morey to sign forward P.J. Tucker, a defensive stopper at power forward known for scoring more hustle points than offensive points. Tucker, cleared from offseason knee surgery to begin on-court workouts, said the opportunity to join Harden in Philadelphia has been in the works for two years. He was glad to see it become reality.

NBA: James Harden waiting, will take ‘whatever is left’ from 76ers