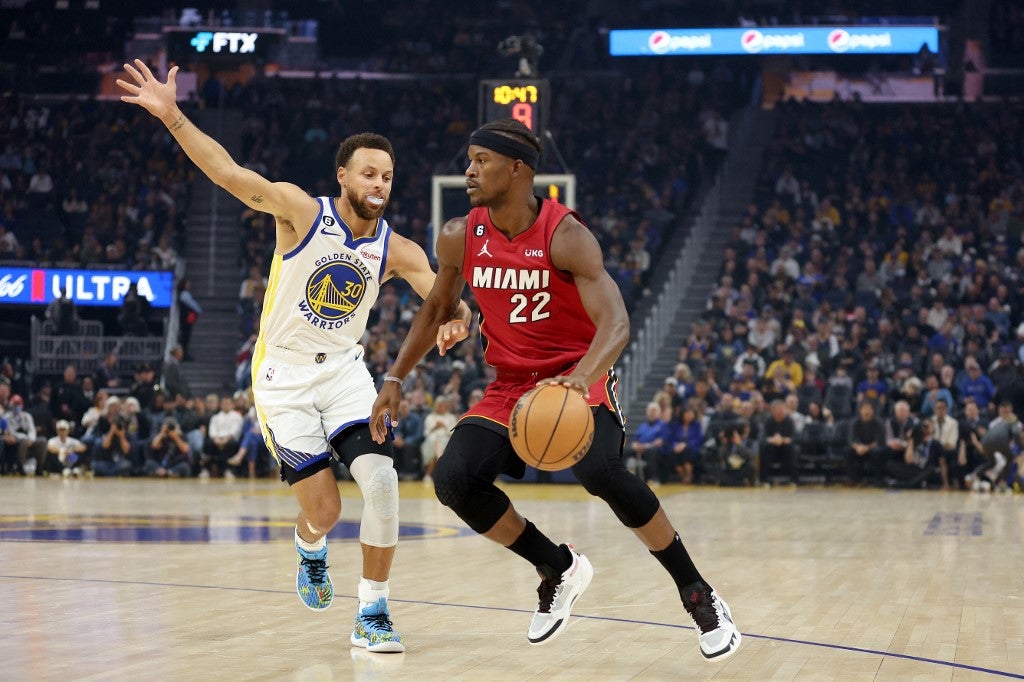 FILE– Jimmy Butler #22 of the Miami Heat is guarded by Stephen Curry #30 of the Golden State Warriors at Chase Center on October 27, 2022 in San Francisco, California. Ezra Shaw/Getty Images/AFP

Jimmy Butler put up 23 points, eight assists and six rebounds, leading the host Miami Heat to a 116-109 win over the Golden State Warriors on Tuesday night.

The Warriors fell to 0-4 on the road in part because they couldn’t stop Butler in a couple of crucial situations. Butler made the go-ahead three-point play with 1:48 left, drawing a foul on Andrew Wiggins for a 112-109 lead. Butler also made a mid-range jumper with 9.5 seconds left, giving Miami a 114-109 lead.

Heat guard Tyler Herro, who entered the game averaging 19.9 points, was accidentally poked in his left eye by Golden State’s Moses Moody with 6:01 left in the second quarter. Herro suffered a contusion and did not return, finishing with just two points in 10 minutes.

Miami was also led by reserve guard Max Strus, who scored a game-high 24 points as the Heat snapped a two-game losing streak.

The Heat also got 19 points from Bam Adebayo, 17 points from Duncan Robinson and 13 points and nine assists from Kyle Lowry.

Miami improved to 2-3 at home. The Heat also snapped a three-game head-to-head losing streak against the Warriors.

Golden State also got 21 points from Wiggins and 19 points from Klay Thompson, who was rested in the Warriors’ previous game on Sunday.

Miami closed the first quarter on a 20-3 run, taking a 33-24 lead into the second. Curry had eight points on perfect shooting — 3-for-3 on field goals, including both his 3-pointers.

In the final quarter, however, Miami scored the final seven points to ice the game.

NBA: Kings fend off Heat for first win of season