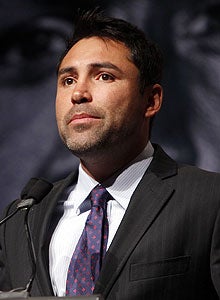 The card, dubbed “Knockout Kings”, features four bouts, two of them yet to be revealed, in which the audience will be able to vote for the night’s top boxer and the winner will receive a $100,000 bonus.

“We wanted to put together a fight card that would keep the judges at home,” Golden Boy chief executive Richard Schaefer said. “We’re not here to discuss that (Pacquiao) fight. But September 15 you can leave your scorecards at home.”

Schaefer said the “Knockout Kings” idea was in the works long before Bradley was given the victory over Pacquiao, which will spark a rematch later this year.

“It really is no reference to what happened this past weekend,” Schaefer said.

But Pacquiao’s fate does remind fighters about the dangers of leaving the outcome in the hands of judges by failing to knock out a foe, former fighter and Golden Boy president Oscar de la Hoya said.

Alvarez, 40-0 with one drawn and 29 knockouts, will defend his World Boxing Council light middleweight crown against US southpaw Victor Ortiz, 29-3 with two drawn and 22 knockouts.

Ortiz’s participation is contingent upon his winning or drawing on June 23 against US compatriot Josesito Lopez, 29-4 with 17 knockouts, at Los Angeles.

Should he fall, Lopez is a likely replacement against Alvarez on the Mexican Independence Day card.

Alvarez was originally scheduled to fight US southpaw Paul Williams in September but Williams was paralyzed from injuries suffered in a motorcycle accident last month.