UAAP: Kevin Quiambao delivers as La Salle gets back at UP | Inquirer Sports

UAAP: Kevin Quiambao delivers as La Salle gets back at UP La Salle’s Kevin Quiambao stars in the Green Archers’ win over UP. –Photo by Tristan Tamayo/INQUIRER.net

MANILA, Philippines — Kevin Quiambao took matters into his own hands, scoring 13 of his 18 points in the payoff period to lift La Salle past University of the Philippines, 82-80, boosting their Final Four hopes in the UAAP Season 85 men’s basketball tournament on Sunday at Mall of Asia Arena.

Quiambao, who had two points in the first half, refused to have another bad game like in their first meeting last October, taking charge in the fourth quarter and displaying nerves of steel as he sank two crucial free throws that completed the Green Archers’ comeback from a 12-point, 49-37 deficit early in the third quarter.

The rookie big man kickstarted a 13-5 run to end the third period that trimmed the deficit to four, 63-59, before La Salle unleashed an 8-1 blast to take a 69-66 with 5:40 remaining. James Spencer stopped the bleeding for UP to tie the game but Evan Nelle blocked his layup attempt on the next play.

However, JD Cagulangan accounted for all points in UP’s 6-1 run to cut the lead down to two, 80-78, with 12.5 seconds left before La Salle made the stops and Quiambao sealed the win to finish with 18 points and nine rebounds. 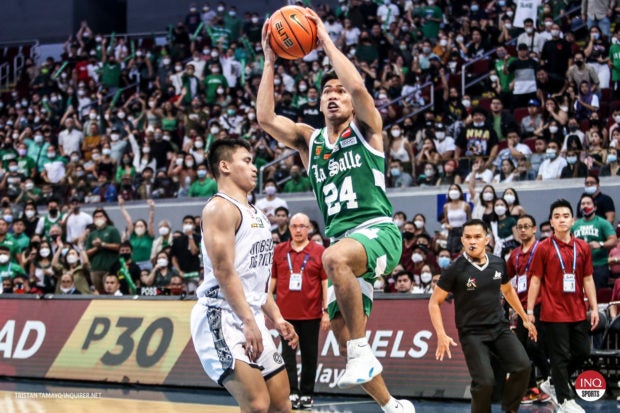 La Salle coach Derrick Pumaren was relieved to finally win one over UP since losing the season opener and getting eliminated in the Final Four in a heartbreaking Final Four last season. The win also tied his squad with  Adamson in the fourth spot with a 5-6 record.

“I think I must give it to the guys. Proud of the way we played today. We got down by 12 points, but we still regrouped, and at the start of the game, I talked to them… We can beat UP, but we can beat them only if we play as a team, have that collective effort, everybody contributing,” Pumaren said.

“We know that they’re the No. 1 team, we know they’re really playing good basketball, so we must really play basketball too, and on defense we gotta make stops.”

The Fighting Maroons’ saw their seven-game winning run get snapped as the Green Archers also prevented them from securing at least a playoff for a twice-to-beat advantage, sliding to a 10-2 record.