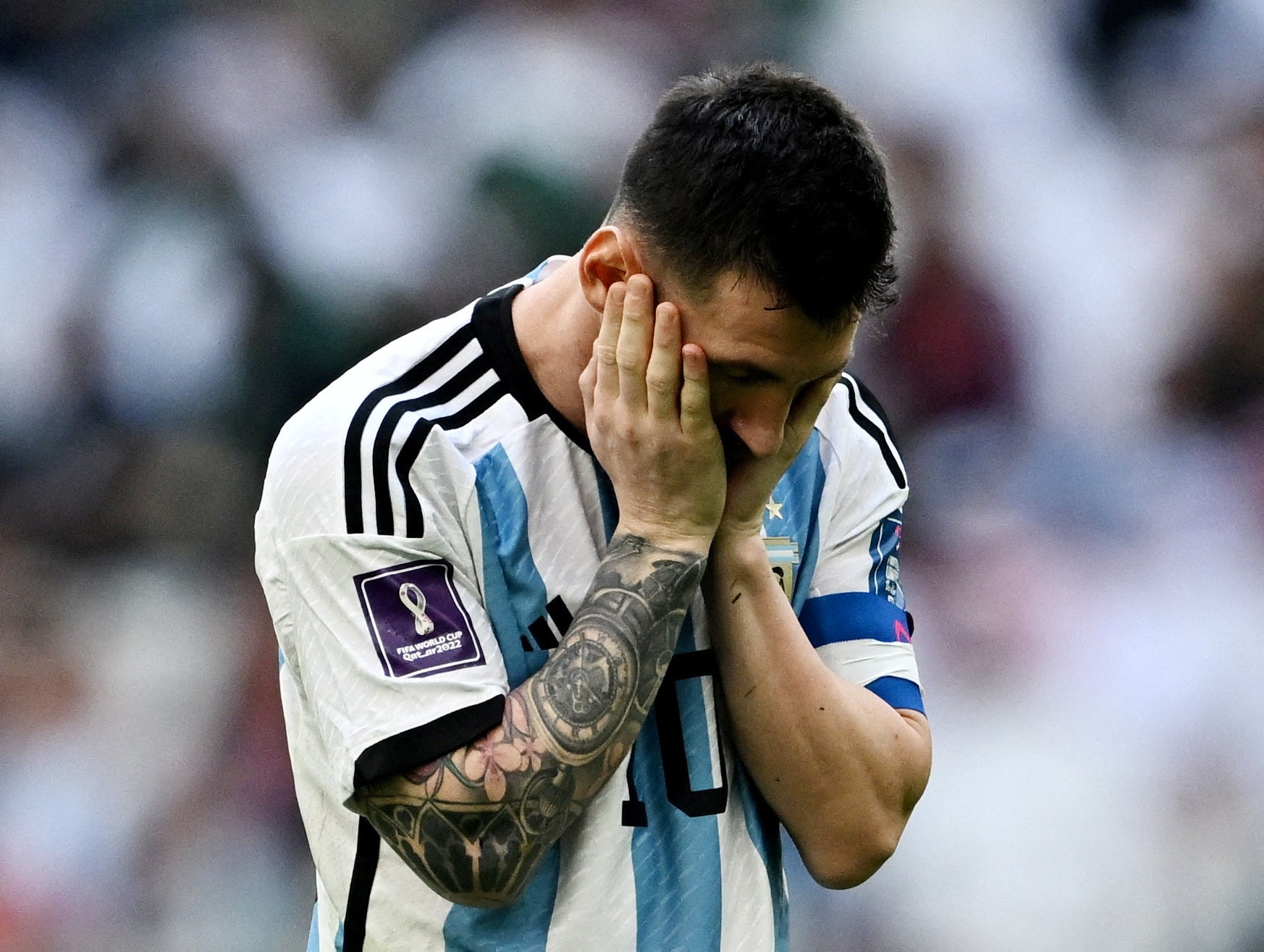 LUSAIL, Qatar—The stars appeared to be aligning for Lionel Messi as he arrived at the Qatar World Cup as the talisman for an Argentina squad that has been simply unbeatable since 2019.

When the mercurial 35-year-old stroked home a penalty 10 minutes into his side’s opening Group C clash against Saudi Arabia it seemed all the pre-tournament talk that this was his, and Argentina’s, time was fully justified.

What happened next suggested that the seven-time Ballon d’Or winner’s fifth and final World Cup might all end up in familiar crushing disappointment.

Saudi Arabia, FIFA’s 51st-ranked team and has suffered 5-0 and 8-0 World Cup defeats down the years, roared back to claim an astonishing 2-1 victory that will go down as one of the greatest shocks in any sport ever.

While their green-clad fans celebrated in delirious fashion, hundreds of Argentina’s traveling army sat staring into space, trying to figure out what had happened.

They might point to the three disallowed goals, one for Messi and two for Lauturo Martinez, as bad luck.

But when the shock subsided they will rightly be angry at how a squad packed with household names and who were one game away from equalling Italy’s 37-match unbeaten run in international football suffered another World Cup blow-out.

And a self-inflicted one at that against a team entirely made up of players from Saudi Arabia’s domestic league.

Messi began like a man on a mission, forcing an early save and then slotting in a penalty for his 92nd international goal.

But even the magician was guilty of taking his eye off the ball as Argentina withered in the face of a ferocious Saudi Arabian onslaught after the interval. Having one goal disallowed for offside could be considered unfortunate. Three smacked of carelessness by Lionel Scaloni’s side who should have been home and dry by halftime.

Saudi Arabia’s offside trap was canny, but forwards of the quality of Messi, Martinez and Angel Di Maria ran into it seven times in the first half – one more than they did in the whole of the 2018 tournament in Russia.

No one thought it would matter much and that Argentina would change gear after the break.

But from the moment the second half kicked off they looked ragged, cumbersome and ponderous.

Certainly not like a team widely-tipped to deliver a third World Cup, and first since Diego Maradona’s 1986 glory.

When Saleh Al-Shehri got away from Cristian Romero all to easily to equalize in the 48th minute to draw Saudi Arabia level, it should have focussed Argentine minds.

Instead, they looked rattled and when the Saudis swarmed in attack again five minutes later Salem Al-Dawsari shrugged off some flimsy challenges to curl a winner that Messi himself would have been proud to have in his glittering collection.

Even then, with so much time left on the clock, Argentina’s quality should have shone through to avert humiliation.

Scaloni threw on Julian Alvarez, Lisandro Martinez and Enzo Fernadez on the hour but all too little effect as Argentina labored in attack, with Angel Di Maria looking heavy-legged and Messi continually running into a green wall.

Argentina can still salvage their World Cup as it did in 1990 when it reached the final having been shocked by Cameroon in their opening game, but Scaloni has some serious thinking ahead of their next game against a dangerous Mexico side.

And with Poland also in the group, they have left themselves with little wriggle room and Messi’s hopes hanging by a thread.