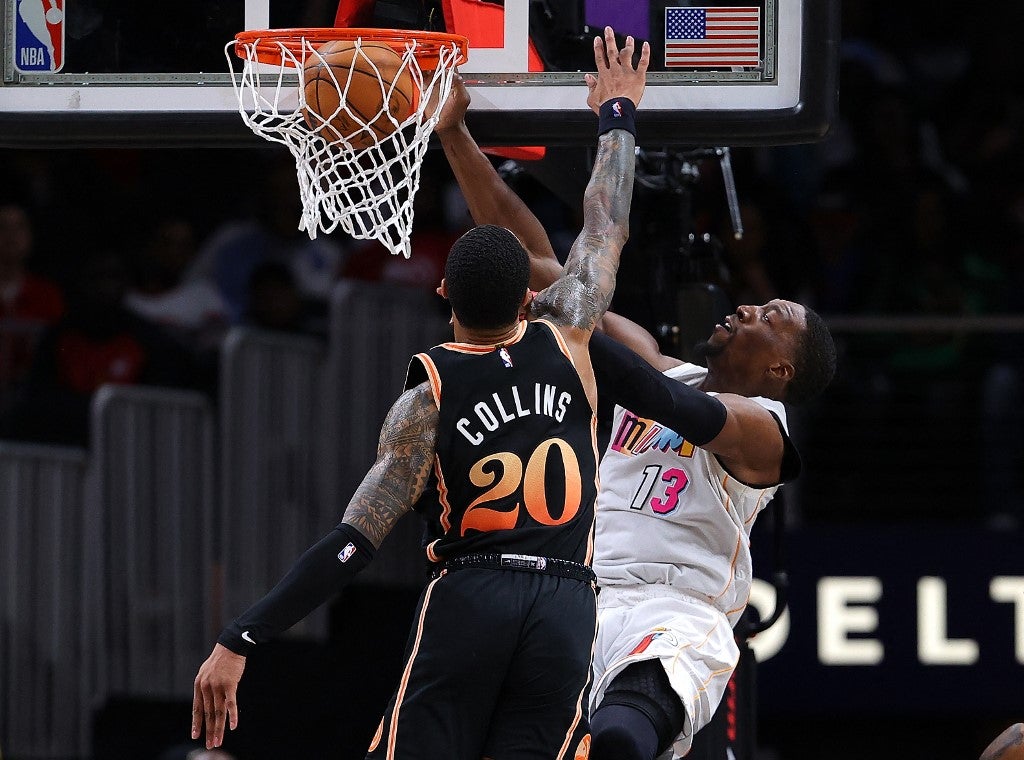 Bam Adebayo #13 of the Miami Heat dunks against John Collins #20 of the Atlanta Hawks during the second half at State Farm Arena on November 27, 2022 in Atlanta, Georgia. Kevin C. Cox/Getty Images/AFP

Bam Adebayo scored 32 points and Tyler Herro came up with his first career triple-double to help the Miami Heat extend their winning streak to three games with a 106-98 victory over the Atlanta Hawks on Sunday.

The win ended a seven-game road losing streak for Miami, which won only its second game away from home.

Adebayo was 13-for-20 from the floor, 6-for-6 at the foul line and added eight rebounds. He scored 14 points in the third quarter.

Herro, who has been playing with a sprained left ankle, had 11 points on 3-for-13 shooting, with 11 rebounds and 10 assists.

The Heat also got 20 points and nine rebounds from Caleb Martin and 16 points from Max Strus.

Atlanta was led by John Collins, who finished with 23 points and 14 rebounds, and Trae Young, who had 22 points and 14 assists. But Young was only 4-for-16 from the floor and the Hawks shot just 39.8 percent from the field. De’Andre Hunter scored 18 points.

The Hawks failed to score 100 points, ending a 19-game streak to start the season and a 40-game streak dating back to last season.

The Hawks led by 11 when Collins made a turnaround jumper with 2:19 left in the second quarter and led 60-51 at the break. But Miami outscored Atlanta 16-4 to open the second half and took the lead on Kyle Lowry’s 3-pointer at 8:27 of the third. The Hawks never led again.

It was the first of four regular-season meetings between the two clubs and Miami continued to exert its dominance. The Heat won three of the four games last season.

The Hawks complete a back-to-back on Monday at Philadelphia. Miami plays the second contest of its four-game road trip on Wednesday at Boston.