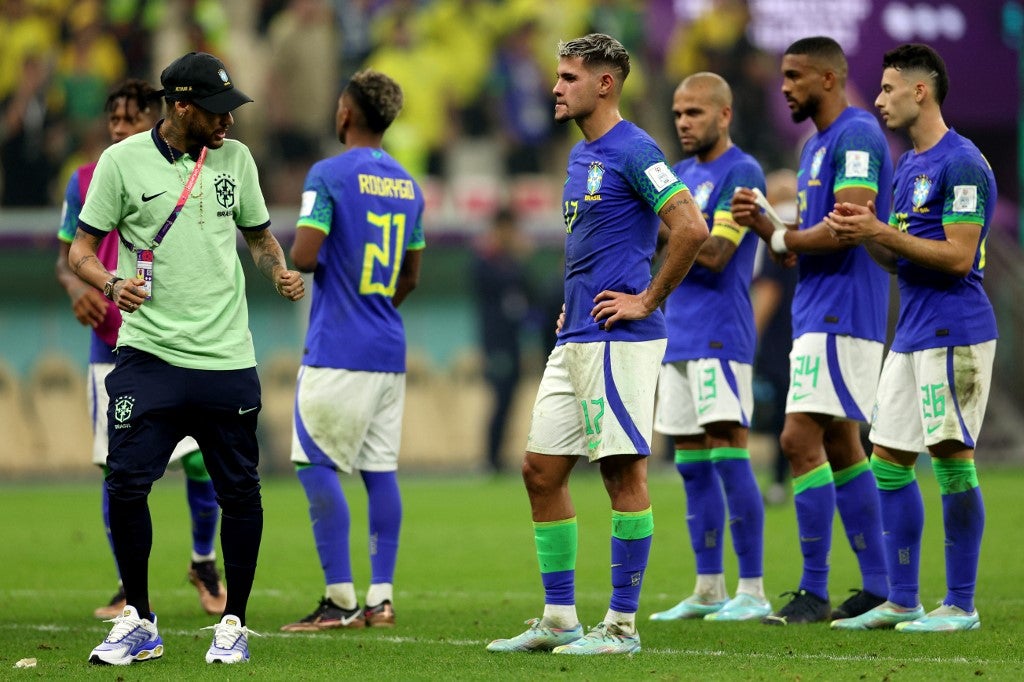 Brazil’s forward #10 Neymar and teammates react at the end of the Qatar 2022 World Cup Group G football match between Cameroon and Brazil at the Lusail Stadium in Lusail, north of Doha on December 2, 2022.  (Photo by Adrian DENNIS / AFP)

DOHA—World Cup favorite Brazil is racing to overcome injuries to key players as it prepares for its last-16 match against South Korea on Monday, after a heavily changed side lost 1-0 to Cameroon on Friday night.

Neymar is still recovering from an ankle injury suffered in their debut win against Serbia, and they have only one pure full back available after left back Alex Telles suffered a knee injury in the Cameroon game.

Starting full backs Danilo and Alex Sandro are out after injuries suffered earlier in the competition and their availability is still unclear.

With their ticket already booked for the next round after two wins, Tite on Friday made nine changes to the team that won 1-0 against Switzerland, leading to Brazil’s first loss to an African nation in its World Cup history.

“The physical demand is ever increasing, the time is short, it’s a cumulative effect of games and sometimes you don’t have the ideal recovery time on your hands,” coach Tite told a news conference on Friday.

“I don’t really know what to say other than that, mentally, the Cup is very demanding. It drains you. The intensity of the matches, the preparation – they are components of analysis that we have to delve into deeper, but they are all considerable.”

Tite did not let media attend their training session on Saturday but said Neymar, Alex Sandro and Danilo should be on the pitch to test their condition.

The case of Alex Telles looks to be more serious.

“It doesn’t look good, and the players know when something is not right,” captain Thiago Silva told reporters on Friday.

“He felt a really strong pain in his knee and was really worried in the changing room. We all tried to cheer him up but he was not feeling right.” Picture of the swollen ankle of Brazil’s forward #10 Neymar taken as he leaves the field at the end of the Qatar 2022 World Cup Group G football match between Brazil and Serbia at the Lusail Stadium in Lusail, north of Doha on November 24, 2022. (Photo by Giuseppe CACACE / AFP)

If neither can play, center-back Marquinhos could perhaps switch to the left and 39-year-old Dani Alves, who became the oldest Brazilian to start a World Cup match against Cameroon, could be tried out on the right.

If Neymar is still out, Real Madrid prodigy Rodrygo is likely to be Tite’s first option, as the pairing of Fred and his Manchester United team mate Casemiro in the midfield that Tite used against Switzerland was less than convincing.

Newcastle’s Bruno Guimaraes could also be an alternative, pushing Lucas Paqueta forward into a playmaking role.

South Korea will rely on talisman Son Heung-min to lead them against the odds-on favorites on Monday, after he ran himself into the ground on Friday to ensure his team reached the last 16 with a dramatic come-from-behind 2-1 win over Portugal on Friday.

The Koreans are the only Asian side to have reached the semi-finals before, when they were co-hosts with Japan in 2002, and they will be hoping to shock Brazil on Monday to make history again.