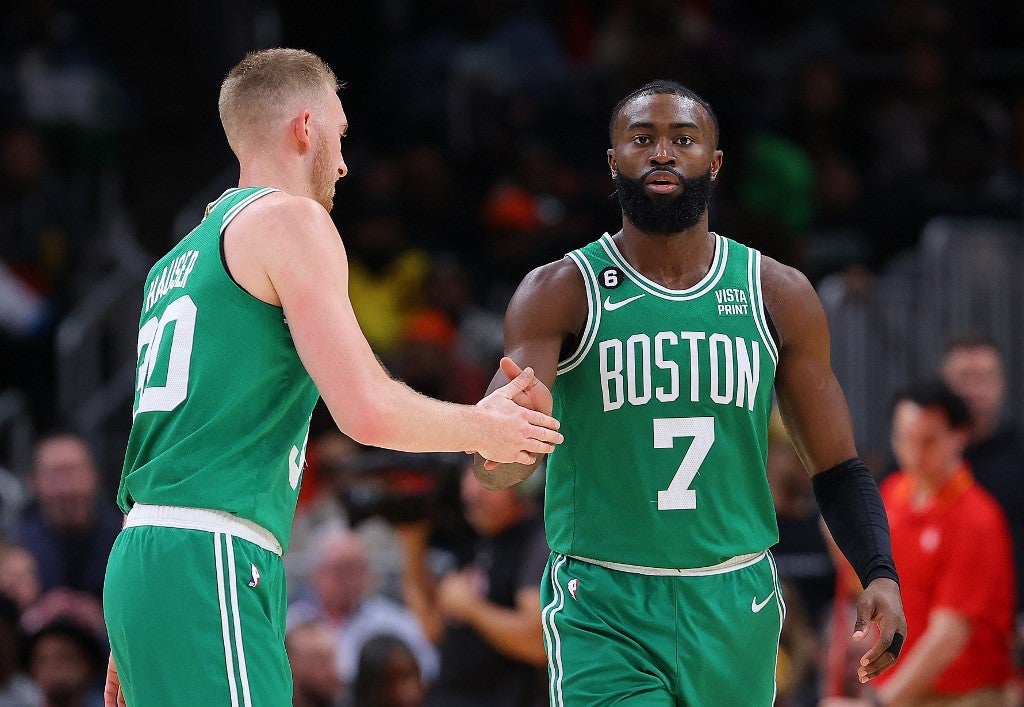 FILE – Jaylen Brown #7 of the Boston Celtics reacts with Sam Hauser #30 after a basket against the Atlanta Hawks during the second half at State Farm Arena on November 16, 2022 in Atlanta, Georgia. Kevin C. Cox/Getty Images/AFP

Jaylen Brown totaled 34 points and 10 rebounds as the Boston Celtics struggled at times in the second half before pulling away in the final minutes for a 103-92 victory over the Brooklyn Nets on Sunday night in New York.

Brown dominated during the first meeting between the teams since Boston completed a four-game sweep in the first round on April 25. Brown scored 17 straight points and 20 in the opening quarter after Boston started slowly, then added eight more in the fourth.

Clear the runway for JB in tonight's @JetBlue Play of the Game ✈️ pic.twitter.com/jHdbCLWcJM

Jayson Tatum bounced back from being held to a season-low 14 points in Friday’s overtime loss to Miami and added 29 points to go along with 11 rebounds. He scored 12 points in the final quarter after the Celtics were held to 13 in the third and also had four of Boston’s 11 steals.

The Celtics survived missing 13 of 17 shots and committing eight turnovers in the third and held a 75-69 lead into the fourth. Brooklyn was within 78-76 when Tatum was called for goaltending on Harris’ shot attempt with 7:22 remaining, but Al Horford hit a 3 and Brown had consecutive baskets for an 85-76 lead a little over a minute later.

Two free throws by Tatum upped the lead to 90-79 with 5:07 left. After the Nets were within 90-85 on Durant’s three-point play, Boston finished it off with four free throws by Brown and seven straight points by Tatum, whose 3-pointer opened a 101-85 lead with 1:43 remaining.