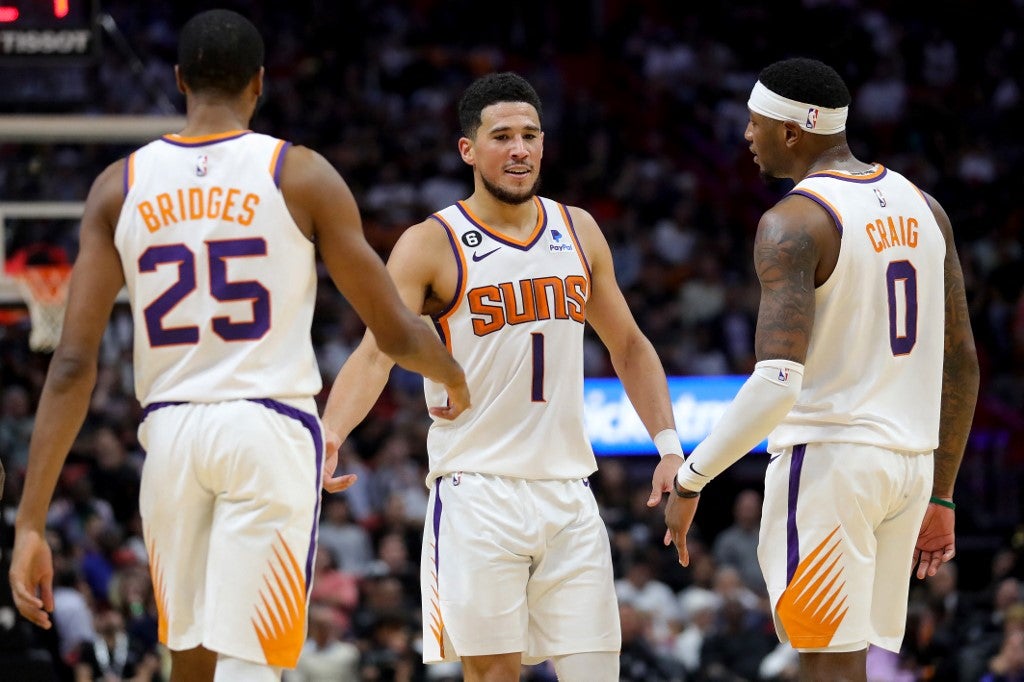 FILE – Devin Booker #1 of the Phoenix Suns high fives teammates Mikal Bridges #25 and Torrey Craig #0 after being fouled during the fourth quarter against the Miami Heat at FTX Arena on November 14, 2022 in Miami, Florida. Megan Briggs/Getty Images/AFP

Deandre Ayton scored 25 points and grabbed 10 rebounds and Mikal Bridges added 20 points, 17 of them in a dominating first half, as the visiting Phoenix Suns produced a 133-95 win over the short-handed San Antonio Spurs on Sunday afternoon.

Phoenix got back on track after having a six-game winning streak snapped by Houston at home on Friday. The Suns outscored San Antonio by 25 points in the second quarter behind Bridges’ blistering showing from beyond the arc.

They assumed a 30-point edge at the half and strolled to the finish, leading by as many as 44 points midway through the third period.

Devin Booker also had 20 points for the Suns, with Dario Saric scoring a season-high 17, Jock Landale hitting for 12 and Landry Shamet adding 10.

The loss was the 11th in a row for the Spurs, their worst losing streak since they lost 13 straight in 1989. San Antonio has not won since Nov. 11 and the team has just one win in its past 17 games.

The Spurs led by as many as seven points early in the first quarter before Phoenix took charge over the final 4 1/2 minutes of the period. The Suns were up 35-30 after the period before they ran away with the game in the second, outscoring the Spurs 36-11 and forging a 15-0 run over a nearly four-minute stretch of the quarter for a 71-41 lead at the break.

Bridges knocked down five of his six 3-point attempts in the half and tied Ayton with 17 points before halftime. Booker added 11 over the first 24 minutes for Phoenix, which outshot the Spurs 53.3 percent to 8.3 percent from beyond the arc.

Johnson paced San Antonio with 11 points at halftime. The Spurs had more turnovers (11) than assists (7) in the half.

San Antonio played without starters Jakob Poeltl (right knee) and Jeremy Sochan (right quad) and key reserves Josh Richardson and Doug McDermott, both with right ankle sprains. Coach Gregg Popovich also missed the game, his second in a row, after he underwent a minor medical procedure earlier in the week.