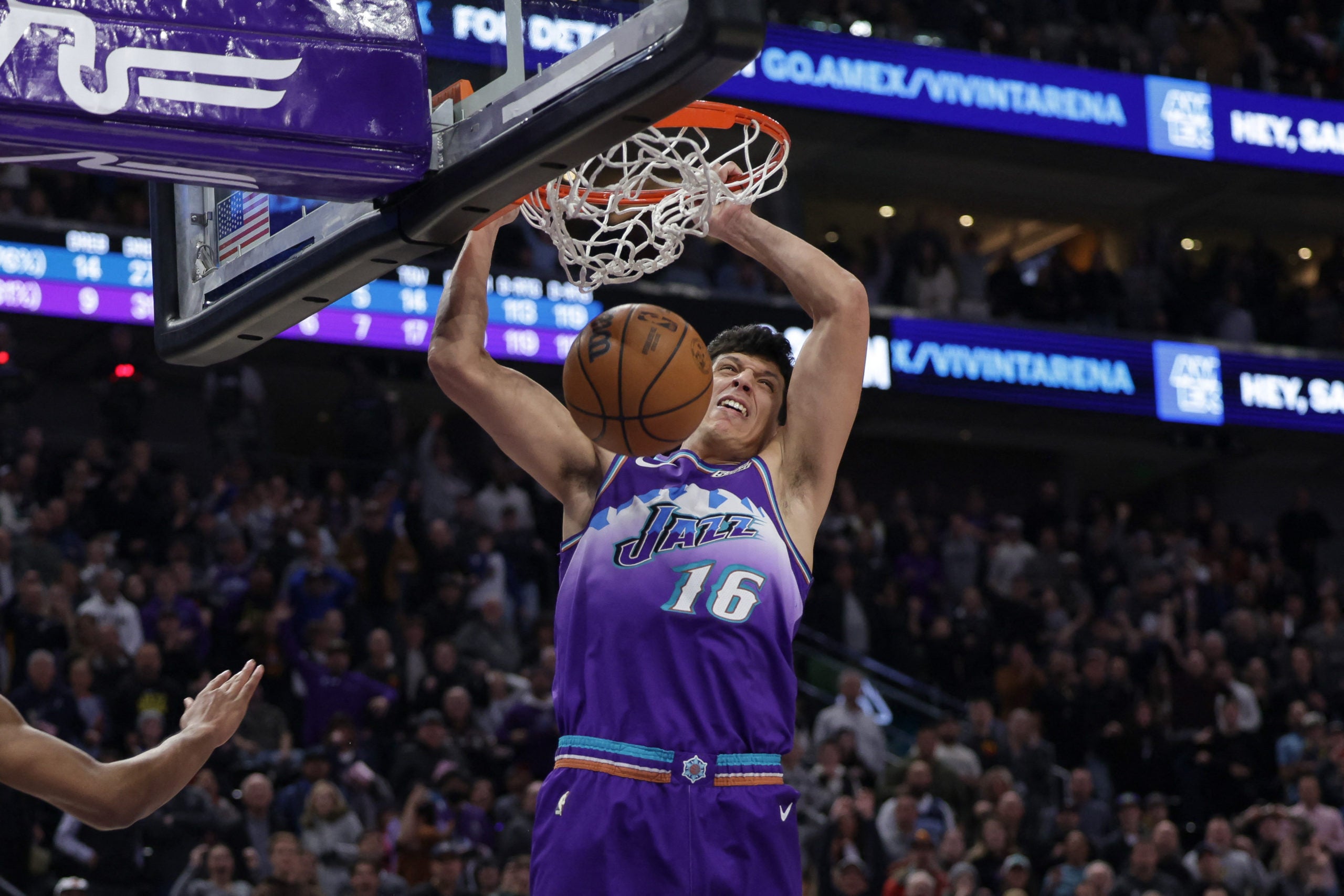 Utah Jazz forward Simone Fontecchio (16) dunks the basketball to win the game 124-123 against the Golden State Warriors in the final seconds of the game at Vivint Arena. Mandatory Credit: Chris Nicoll-USA TODAY Sports

Rookie Simone Fontecchio made a last-second, game-winning dunk just after Malik Beasley hit a 3-pointer as the Utah Jazz scored five points in the final 7.8 seconds to earn an improbable 124-123 victory over the Golden State Warriors on Wednesday in Salt Lake City.

Jordan Poole led all scorers with 36 points in a game in which both teams were missing key players.

Poole made one of two free throws with 13.3 seconds remaining to give the Warriors a seemingly safe four-point lead after they trailed by 11 early in the fourth quarter, but the Jazz then pulled off a win with a wild ending.

The late rally began with the 3-pointer from Beasley with 7.8 seconds to go. Nickeil Alexander-Walker then gave the Jazz life with 4.3 seconds remaining by stealing the ball from Poole in a frantic moment. The ball was advanced to Beasley, who connected with Fontecchio for the game-winning bucket with 1.4 seconds left.

Fontecchio and Beasley both finished with 18 points, Collin Sexton added 17, Kelly Olynyk chipped in with 15, Alexander-Walker scored 11 and Walker Kessler had 10 points and 12 rebounds for the Jazz.

SIMONE FONTECCHIO FOR THE WIN OFF THE STEAL!@utahjazz WIN 🔥 pic.twitter.com/yyclOCRtAg

That final burst of excitement came moments after the ejection of Utah’s Jordan Clarkson, who posted team highs with 22 points and nine assists. Clarkson knotted the score on with a layup with 56.6 seconds left after the Warriors went ahead with a 7-0 run, but Poole assisted Jonathan Kuminga for a go-ahead dunk with 35.9 seconds remaining.

Kuminga, who scored 24 points, then blocked a jumper by Clarkson and hit one of two technical free throws after the Jazz guard was called for a flagrant-2 foul.

Golden State’s Klay Thompson didn’t have the best shooting night, going 8-for-25 from the field, but finished with 22 points. The Warriors played without Stephen Curry (ankle), Draymond Green (hip) and Andrew Wiggins (adductor).

The Jazz also were not at full strength. Mike Conley remained out with a knee injury, and leading scorer Lauri Markkanen was sidelined due to an illness.

Both teams kept their foot on the gas in the first half, with the Warriors taking a 69-66 lead into the break.