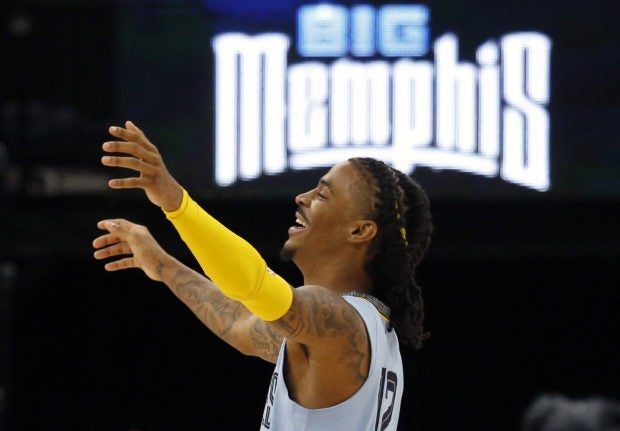 Ja Morant had 26 points, a career-high-tying 13 rebounds and 11 assists to lead the Memphis Grizzlies to a 123-102 victory over the visiting Oklahoma City Thunder on Wednesday.

The Grizzlies have won a season-high four consecutive games and six of their last seven.

Morant took over in the third quarter after Oklahoma City trimmed the Memphis lead to 75-73 with 5:37 left.

He scored seven consecutive points, in a variety of ways. Morant got to the free-throw line, drained a 3-pointer and hit a finger roll as the Grizzlies stretched their lead to nine, their biggest at the time.

It means a lot,” Morant said. “A lot of credit goes to my teammates and my coaches putting me in positions to excel at a high level.

“We knew rebounding was important. I took it upon myself early on, I think I had seven early. Every other stat was from my teammates. Them knocking down shots opened up shots for me on the floor as well.”

Memphis allowed only 15 points in the fourth quarter.

“It was pretty much just locking in, getting stops and rebounds,” Morant said. “We’ve got to continue fighting and play hard.”

Dillon Brooks also picked up Memphis in the third with three 3-pointers. He scored 11 of his 24 points in the quarter.

Jackson scored seven consecutive points in a 10-2 Memphis run to start the fourth that helped them begin to pull away for good.

Morant clinched the triple-double with a steal and feed to Brandon Clarke for a dunk with just more than three minutes remaining.

The triple-double was the second of the season and sixth of Morant’s career, setting the Grizzlies’ all-time mark since the franchise moved to Memphis.

Clarke scored eight of his 17 points in the fourth.

Shai Gilgeous-Alexander led the Thunder with 26 points, going just 4 of 14 from the floor.

It was the first time in eight games Gilgeous-Alexander failed to reach the 30-point mark.

Gilgeous-Alexander helped keep Oklahoma City in the game, especially early, by getting to the free-throw line.

He was 9 of 10 from the free-throw line in the first quarter and wound up attempting a career-high 19 free throws, making 17.

The Thunder shot just 37 percent from the field, tying a season low.