Djokovic must defy injury and crowd at Australian Open 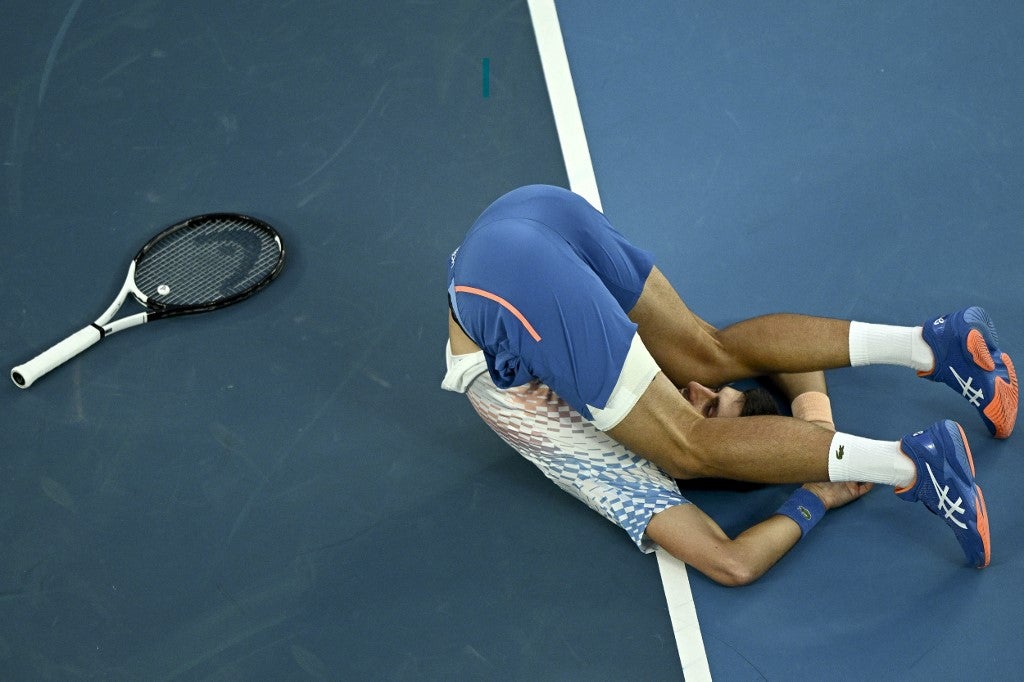 Serbia’s Novak Djokovic falls as he hits a return against Bulgaria’s Grigor Dimitrov during their men’s singles match on day six of the Australian Open tennis tournament in Melbourne on January 21, 2023. (Photo by ANTHONY WALLACE / AFP)

Novak Djokovic will have to defy his troublesome hamstring and the home crowd when he plays Alex de Minaur on Monday for a place in the Australian Open quarterfinals.

In the women’s draw, Aryna Sabalenka faces a severe test of her title credentials when she clashes with Olympic champion and 12th seed Belinda Bencic.

Djokovic would normally be hot favorite at Melbourne Park, where the former world number one is chasing a record-extending 10th Australian Open crown and 22nd major title.

But the 35-year-old from Serbia has been struggling badly with a left hamstring injury ever since he arrived at the tournament.

He had heavy strapping on his thigh and required medical treatment in his three-set third-round victory over 27th seed Grigor Dimitrov.

Djokovic will also need to deal with what is bound to be a partisan home crowd at the 15,000-capacity Rod Laver Arena.

There is also fear of the unknown — Djokovic and 22nd-seeded De Minaur have never played each other before.

“Of course it’s a big challenge of playing an Aussie guy here in front of his home crowd,” said Djokovic.

Djokovic, who can return to top of the world rankings if he wins the title, added: “The fact that I never faced him is also challenging for both me and him.”

Also in the men’s draw, which has lost six of its top 10 seeds, Russia’s Andrey Rublev plays Danish teenager Holger Rune in an encounter between the fifth and ninth seeds.

Roberto Bautista Agut of Spain goes up against unseeded Tommy Paul of the United States, while also in the last 16, Ben Shelton and J.J. Wolf face off in an all-American showdown.

The women’s draw has been similarly shaken up by a series of shocks.

Fifth seed Sabalenka of Belarus will hope she is not another victim against Switzerland’s Bencic.

Neither has dropped a set in the first Grand Slam of the year, but something will have to give.

Also playing is the former number one Karolina Pliskova, up against China’s Zhang Shuai.

Linda Fruhvirtova, the Czech rising star who is just 17, will hope to burnish her elite-level credentials against Donna Vekic of Croatia.

Australian Open: Djokovic barrels into third round as seeds fall