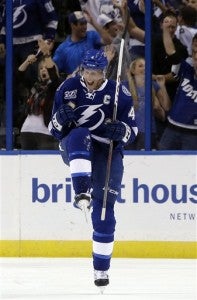 TAMPA, Florida— Cory Conacher had two goals and an assist to lead the Tampa Bay Lightning past the Winnipeg Jets 8-3 on Friday night.

The Lightning, 6-1-0 this season, have scored five or more goals in four consecutive games.

Tobias Enstrom, Paul Postma and Andrew Ladd scored third-period goals for Winnipeg, which has lost three in a row. The Jets were coming off a 6-3 loss at Florida on Thursday night in which the Panthers scored five third-period goals.

Conacher, Stamkos and Lecavalier all had first-period man-advantage goals as the Lightning, who started play with the NHL’s fifth-best power play, grabbed a 3-0 lead. Winnipeg entered with the league’s worst penalty-kill unit.

Stamkos has five goals and 14 points during a season-opening seven-game point streak.

Detroit’s Jimmy Howard made 23 saves for his 114th victory, tying Dominik Hasek for seventh place on the team’s career list.

The rebuilding Red Wings had lost their season opener 6-0 at St. Louis.

RALEIGH, N.C.— Dan Ellis made 33 saves for his first shutout in more than two years and Eric Staal scored as Carolina improved to 9-0-1 in its last 10 home games against Otttawa.

Ellis, making only his second start of the season in place of Cam Ward, earned his 13th career shutout and first since Nov. 9, 2010, against Toronto while he was with Tampa Bay.

Ottawa came in with a 5-1-1 record but struggled to generate many scoring chances. Jason Spezza underwent surgery on a herniated disc in his back and could be sidelined for up to two months.

Craig Anderson made 34 saves for Ottawa.

Niklas Backstrom had a goal and an assist to help Washington (2-5-1) end a two-game skid.

Bruno Gervais and Brayden Schenn scored for the Flyers (2-6), who have lost three in a row.

Brouwer’s third goal of the season at 3:57 of the third snapped a tie and put the Capitals ahead for good. He took a pass in the left circle from Mike Green and wristed a shot over goalie Ilya Bryzgalov’s shoulder.

Bryzgalov stopped 23 shot for the Flyers.