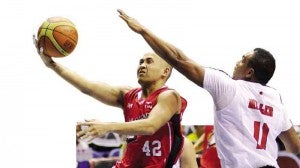 JV CASIO of Alaska gets away from Willie Miller of Barako Bull for a layup in yesterday’s PBA Philippine Cup match at Smart Araneta Coliseum. AUGUST DELA CRUZ

MANILA, Philippines — Playing with a lot of resolve late in a game it absolutely could not lose, Alaska posted an 89-80 victory over Barako Bull Sunday night to put itself in another knockout match for the last quarterfinal spot in the PLDT MyDSL Philippine Cup at Smart Araneta Coliseum.

JV Casio and Gabby Espinas did the most damage on the Energy in the fourth quarter, forming a two-sided battering ram that ultimately gave the Aces a new lease on life after ending the elimination round tied for sixth to ninth spots with Barako Bull and two others at 5-9.

The long road back to contention for the season-opening championship starts at 8 p.m. Monday for the Aces, who will battle the Meralco Bolts before drawing the unenviable task of beating the No. 1 team—Barangay Ginebra—two straight times after qualifying as the eighth seeds.

Globalport is the other team in that logjam, and, after the application of the quotient that had the Energy still finishing sixth, the Batang Pier took the seventh seed and will battle No. 2 Rain or Shine, also needing to beat the Elasto Painters twice.

Those games are scheduled on Wednesday at Mall of Asia Arena in Pasay, also the venue of the lone game slated today as the Aces and the Bolts break a 1-1 deadlock in the tournament for the right to progress to the next stage. Barako Bull drew powerhouse Petron Blaze, the third seed, as a quarterfinal foe in another best-of-three series.

Seeking to become the first franchise to win this conference four straight years, the Tropang Texters opened up leads of as many as 25 points in the second quarter behind Jimmy Alapag before cruising to the win that gave them fourth spot at 8-6.

The Mixers bagged the No. 5 seed with their series to start Tuesday.

Casio and Espinas starred in a 15-4 run early in the fourth period that had Alaska turning a one-point deficit into a 77-67 lead. The duo scored the last eight points of that spurt as Alaska snapped a three-game slide.

“We just lived to fight another day,” said Alaska coach Luigi Trillo, named as last season’s Coach of the Year by the PBA Press Corps.

“It has been painful this conference because out of the nine games (that we lost), six could have gone either way.”

Casio finished with 24 points built around four triples to pace the Aces, with Espinas finishing with 21, all but four of them coming in the final two quarters.

The 5-foot-9 Casio also had seven assists and five boards.