Guevarra has not seen action for the Meralco Bolts this conference due to a left hamstring injury but he certainly showed glimpses of his explosive self with a strong finish, saving an otherwise anticlimactic dunk contest with three well-executed throwdowns.

“I’m just really thankful that I was still able to do those dunks,” said Guevarra. “I was able to control myself and do what I’m only capable of coming off an injury and still feeling heavy.” 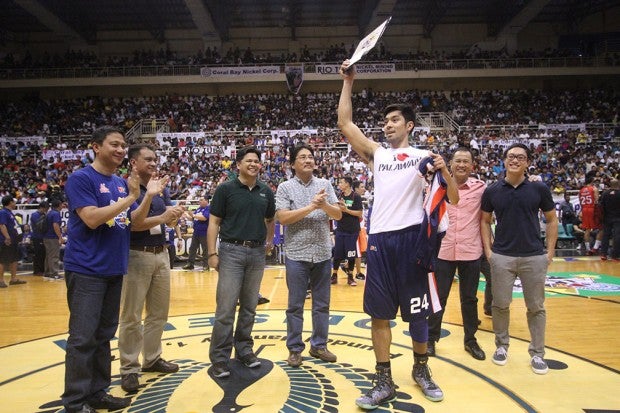 Limited in what he could do with his body still recovering, Guevarra did enough to win and somehow bring the crowd back to life.

The crowd was fired up after an exhilarating 3-Point Shootout where second-year guard Terrence Romeo topped one-time winner of the event and one of the favorites to win James Yap, and surprise finalist JC Intal in the championship round.

But the Slam Dunk contest started poorly. While last year’s co-winner Guevarra soared to new heights in becoming just the third player to win the competition since Vergel Meneses and Niño Canaleta more than once, fan-favorite Justin Melton couldn’t even make his first attempt.

“I’m happy but I want to surpass that and hopefully I can compete in the slam dunk contest next year.”

Instead, Barangay Ginebra forward Japeth Aguilar faced Guevarra in the final where the two needed a slam off to decide the winner after ending up tied with 48 points.

Aguilar tried to take off from the free throw line but jumped a foot nearer before Guevarra closed the show with a between-the legs-dunk off the baseline, which he said he took from the pages of his idol Kobe Bryant.

Bryant, the Los Angeles Lakers legend, won the contest in 1997 by putting the ball between his legs in midair.

His previous two dunks were coming off help from his teammates Reynel Hugnatan and Simon Atkins. Hugnatan, while sitting on a chair placed under the semicircle facing the other court, threw the ball above his head before Guevarra leaped over him and caught the ball with one hand.

Guevarra then followed that dunk with an even higher degree of difficulty when he jumped over Atkins before getting the ball underneath him for the two-handed dunk.

As hard as it looked, Guevarra said he wasn’t able to practice any of his dunks.

It appeared though as if he perfected every single one of it.