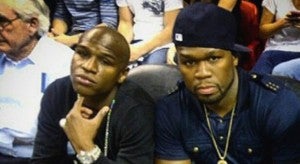 NEW YORK—Even 50 Cent is giving his two cents’ worth.

“Champ is going to do it,” Jackson told radio station Power 105.1, referring to Mayweather. “He’s going to smoke him. It’s going to look like he pumped up for no reason.”

Mayweather’s usual conservative style might not be enough to hold off Pacquiao, Tyson warned.

‘Mayweather has to fight’ Jackson and Tyson are the latest big names to weigh in with an opinion on how the long-awaited showdown between the two pound-for-pound greats might go when they step into the ring in Las Vegas on May 2.

Tyson said the fighters who have troubled Pacquiao have been prolific punchers.

Pacquiao is ‘all over’

“Floyd doesn’t throw nowhere near 100 punches a round,” Tyson said. “He’s more, you know, scientific about it. He really plots a lot. And he sits around and he poses. And this guy (Pacquiao) is all over—fading, moving.

“I just don’t think (Mayweather) is going to be able to play that plotting, skill … Floyd has got to fight the first couple of rounds.”

Jackson, for his part, said he would back up his confidence on Mayweather with a bet. “Probably like 1.6 (million). I’ve been thinking this out. “I’m going to make a real bet. He’s focused right now.”

Jackson last year taunted Mayweather’s reading ability after a radio station aired an audio clip of the fighter struggling to read a promotion transcript. He challenged the US fighter to read a page from a Harry Potter book in exchange for Jackson’s $750,000 charity donation.

Jackson compared his spats with Mayweather to that of a married couple taking out frustrations over other things on each other.

“We can both get madder when we’re not speaking to each other,” he said.

Tyson isn’t the only former heavyweight world champion who has his eye on the Pacquiao-Mayweather bout.

Evander Holyfield, speaking at a sponsors’ event in New York on Tuesday, said he plans to be at the welterweight unification bout at MGM Grand Garden Arena.

“I don’t know who’s going to win, that’s the reason I’m going to see it,” the four-time heavyweight champion told Newsday. “If I had to pay, I would pay to see that fight, because that’s how great that fight will be.”

Holyfield said the differing styles of Mayweather and Pacquiao make the fight hard to handicap.

“Pacquiao, the only way he can win is if he corners him off,” Holyfield said.

“Can he corner him off? If he corners him off, I think he will win … I don’t think he can. But that’s what makes the fight so interesting.”

50 Cent planning to bet $1.6-million on Mayweather against Pacquiao