‘Mommy D’ to Mayweather: You cheated

Mommy Dionesia Pacquiao has a mouthful for Floyd Mayweather.

The mother of Filipino people’s champion Manny Pacquiao said she was angry at undefeated American boxer Floyd Mayweather Jr. because he cheated during the megabout with her son which aired in Manila Sunday morning. 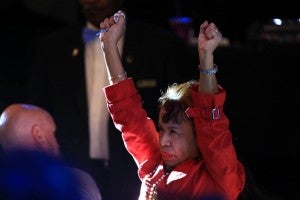 Mommy D cheers for his son during the official weigh in of Manny Pacquiao and Floyd Mayweather Jr. at the MGM Grand Arena in Las Vegas, Nevada. PHOTO BY REM ZAMORA/INQUIRER/See more at FRAME

“Nanalo ka, Mayweather, sa daya mo,” (‘You won, Mayweather, because you cheated’), she said in a GMA 7 interview which aired Monday.

She lamented that Mayweather played dirty during the historic fight

“Nagalit ako kasi marumi siya,” (I got angry because he played dirty) Mommy D said. “Hindi makasuntok si Manny kasi niyakap niya.” (Manny could not punch because he was being held)

Mommy D said she got so angry at Mayweather that she wanted to face the American boxer in the ring.

“Kagabi pagsigaw ko, ‘Bagsakin mo na! Ako ang aakyat diyan.’ (Last night, I shouted ‘Knock him down! I will go up there.’),” she said.

Meanwhile, after losing to Mayweather, the mother of the Filipino boxing champ said she wanted her son to retire.

RELATED STORIES
No hexing for Mommy D; she’s all fired up

‘Mommy D’ not nervous ahead of Pacquiao-Mayweather fight