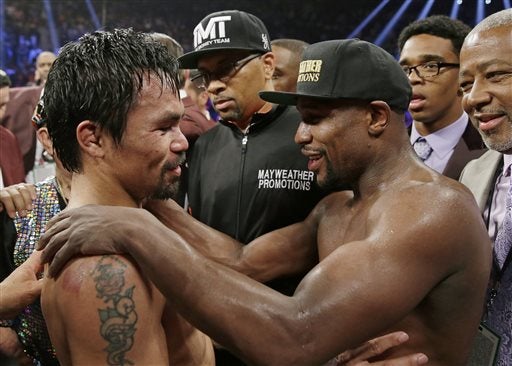 Manny Pacquiao struck back at Floyd Mayweather Jr. on Friday following a report that the American underwent an illegal IV infusion a day before their fight in May, calling for a “fair” rematch on the same day denials by Mayweather and the US Anti-Doping Agency (Usada) left key questions unanswered.

“I was vindicated,” Pacquiao said in a report filed by Inquirer correspondent Aquiles Zonio for Philboxing.com. “The Mayweather camp had been accusing me of using (performance-enhancing drugs).

“Look at what happened. It turns out he’s the one who violated the rules set by the NSAC (Nevada State Athletic Commission),” Pacquiao said.

While there was no question Mayweather was issued a TUE, the Usada did not explain why it granted the exemption on May 20 based on a request from the Mayweather camp on May 19—or 17 days after the fight.

The Usada and Mayweather expectedly issued denials over the banned IV procedure, but none responded to key points raised by the revelations on SB Nation by investigative reporter Thomas Hauser.

“As was already publicly reported in May of this year by the (NSAC), Mr. Mayweather applied for and was granted a therapeutic use exemption (TUE) by Usada for an IV solution of saline and vitamins that was administered prior to his May 2 fight against Manny Pacquiao,” read the Usada statement posted on its website (link: http://www.usada.org/usada-statement-inaccurate-news-reports-pro-boxing/).

“It is simply absurd to suggest that we would ever compromise our integrity for any sport or athlete,” the statement added.

Mayweather issued a denial of his own.

“I did not commit any violations of the Nevada or Usada drug testing guidelines,” Mayweather said. “I follow and have always followed the rules of Nevada and Usada, the gold standard of drug testing.”

Both denials, however, did not address controversial points raised by the Hauser report.

“Why did the exemption come out three weeks after the fight? Are they hiding something?” Pacquiao said. “For the sake of fairness and for the good of the sport, NSAC must be consistent.”

It is a question that needs an answer because Pacquiao applied for a TUE for a legal painkiller for his injured shoulder but was denied by the Usada because he did not inform the agency of a preexisting condition that would necessitate treatment.

Mayweather’s request for saline and vitamins was made, according to sources, for rehydration purposes.

“Imagine, I had to endure terrible pain in my right shoulder from the fourth to 12th round just so I wouldn’t fail in the eyes of my fans,” Pacquiao lamented in the Philboxing story. “We followed the NSAC rules so that even my mineral water and energy vitamins weren’t allowed in my dressing room.”

Pacquiao said it was up to the NSAC to apply the “appropriate sanction” so that it could “show to the world” that it was not giving anybody “preferential treatment.”

Hauser’s story strongly hinted on a tight relationship between Mayweather and the Usada.

While saline and vitamins do not fall under the list of banned substances as per the World Anti-Doping Agency (Wada), the method that Mayweather used in taking them is illegal because “(i)ntravenous infusions and/or injections of more than 50 ml per 6-hour period are prohibited except for those legitimately received [during] hospital admissions, surgical procedures, or clinical investigations.”

This is partly because “an IV infusion can dilute or mask the presence of another substance that is already in the recipient’s system or might be added to it in the near future.”

While the Wada did not have jurisdiction over the Pacquiao-Mayweather bout, the Usada claims to line itself with the protocols and processes of the international antidoping body.

Because of the development, Pacquiao told Zonio he deserved a “fair” rematch—“one where I am not injured and fair play is practiced so that no one is trying to put one over the other.”

“Let’s not have terms dictated solely by the Mayweather camp,” Pacquiao said. “It doesn’t matter if we get the lower split of the purse as long as in other aspects of the fight, everything is fair.”

Pacquiao and Mayweather have engaged in a long-running feud which has not abated since the American won their only meeting in May for the World Boxing Organization (WBO) welterweight title on points.

Mayweather’s fight with eight-division champion Pacquiao was delayed for years partly because of the American’s insistence that the Filipino comply with a strict drug-testing regime.

Mayweather later accused Pacquiao of using performance-enhancing drugs. The Filipino sued and the two settled out of court.

Mayweather is chasing history in Las Vegas on Saturday (Sunday in Manila) when he meets Andre Berto in a bid to match Rocky Marciano’s 49-0 record.

Mayweather, 38, the self-styled “TBE” (“The Best Ever”), is the heavy favorite for the bout at the MGM Grand—Berto has lost three of his last six fights.

Mayweather says he wants to write his name in the history books before he hangs up his gloves—not that many believe he will really retire and there have been growing rumors of a rematch with Pacquiao.

Mayweather’s critics—and there are plenty—accuse the American of raising up the quit talk to drum up interest in a fight against Berto that has threatened to become a box-office flop: There were still hundreds of tickets available on Thursday.

Mayweather, the highest-earning sportsman in the world, told reporters that he would be going for a knockout win—something he has not done since 2011.

Truth out about Mayweather, says Pacquiao