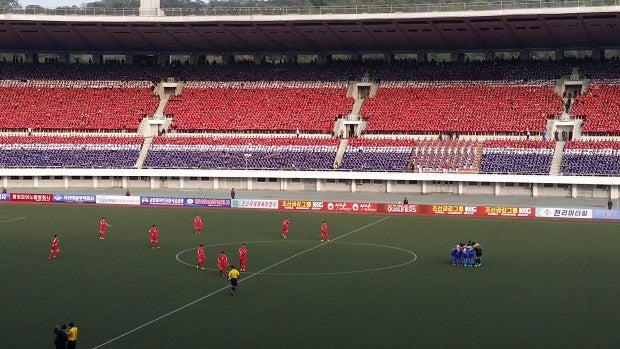 PYONGYANG—On a cold, chilly Thursday afternoon in this reclusive nation’s capital, the Philippines made North Korea take notice of its footballing pedigree.

Given little chance against a team that played like a well-oiled machine, the Azkals delivered a defensive performance for the ages and came away with a scoreless draw against North Korea in a World Cup Qualifying match at Kim Il-sung Stadium.

The Azkals proved equal to every attack by the North Koreans in a tense second half, securing a precious point that kept the Filipinos still in the hunt for a place in the final round of the qualifying competitions.

It was a performance reminiscent of Azkals’ games when they were still starting their rise.

Well-drilled and compact on defense, they left the hosts and their boisterous supporters frustrated.

“To survive here, speaks a lot of this team and the fighting spirit that they showed,” said Azkals coach Thomas Dooley. “They just fought and never gave up. I’m very happy with the performance.”

It boiled down to sturdy defending for the Azkals, enabling them to survive the match without conceding a goal. Skipper Phil Younghusband said the hard work put in by the squad was incredible.

“It was just down to the players working hard and competing,” said Younghusband.

The Azkals became the first team in Group H to take points off the North Koreans, who had streaked to three straight victories to start their qualifying campaign.

The Kim Il-sung stadium has been considered one of the toughest places to play in the continent with Uzbekistan learning the hard way when the North Koreans ambushed them with four goals in the first 30 minutes last June.

But the Azkals stayed composed in the face of constant pressure from the home side’s tall and powerful strikers and even threatened through Stephan Schrock and Younghusband, who had a free kick in the first half that just went over.

The backline of Jerry Lucena and youngsters Luke Woodland and Amani Aguinaldo snuffed out every threat and Neil Etheridge also came up with a couple of spectacular saves in stoppage time to preserve the clean sheet.

Dooley paid tribute to the Azkals’ fighting spirit in the face of repeated North Korean attacks in front of a 50,000-strong crowd.

“It was a very difficult game,” said Dooley. “North Korea had physical, tall and strong players. With all the long balls they sent, it was difficult.”

“But the team fought and never gave up. We definitely played better than in the Uzbekistan game.”

The Azkals came off a 1-5 loss to Uzbekistan last month and North Korea coach Kim Chak-bong said he was surprised with the performance of the Azkals.

“I saw the last game and their fitness wasn’t very good, but today they were very strong, actually stronger than expected,” Kim said through an interpreter. The North Korean crowd was unlike any other that the Azkals had seen, cheering in unison and singing nationalistic songs during the game. They were well-choreographed and for a while, the performance of the red and white and blue-clad supporters took the attention away from the match. The supporters lined up as early as 6 a.m. and the stadium was almost full 90 minutes before kickoff.

In the middle of the crowd, though, a small group of Filipinos braved the disparity in numbers to cheer for their national team.

Pyongyang-based OFWs Willie Quinto and Carlos Miranda did not mind shelling out 50 euros each just to watch the Azkals face North Korea.

“It’s the first time for us to watch a national team play here,” said Quinto, who works for a firm based in Singapore. “It’s just a nice feeling to see fellow Filipinos in Pyongyang.”

The two, who were part of the five Filipinos who watched here, couldn’t help but marvel at the Azkals’ feat.

“We’re proud of their performance. It’s a once-in-a-lifetime opportunity just to watch them play and with the way they played today, you just can’t help but be proud,” said Quinto, who has worked here as cigarette machine technician for 16 years.

Although they are No. 129 in the Fifa rankings, the North Koreans have reached the World Cup twice, most recently in 2010 in South Africa. They also played in the AFC Asian Cup last January, where only the elite teams in the continent qualified.

Holding North Korea to a draw was already impressive as it was, but pulling it off in Pyongyang could be one of the biggest moments yet in Philippine football.

The top team in the group will make the 12- team second round along with the four best second placers in the group.