Mamba out: One final show of greatness for Kobe Bryant 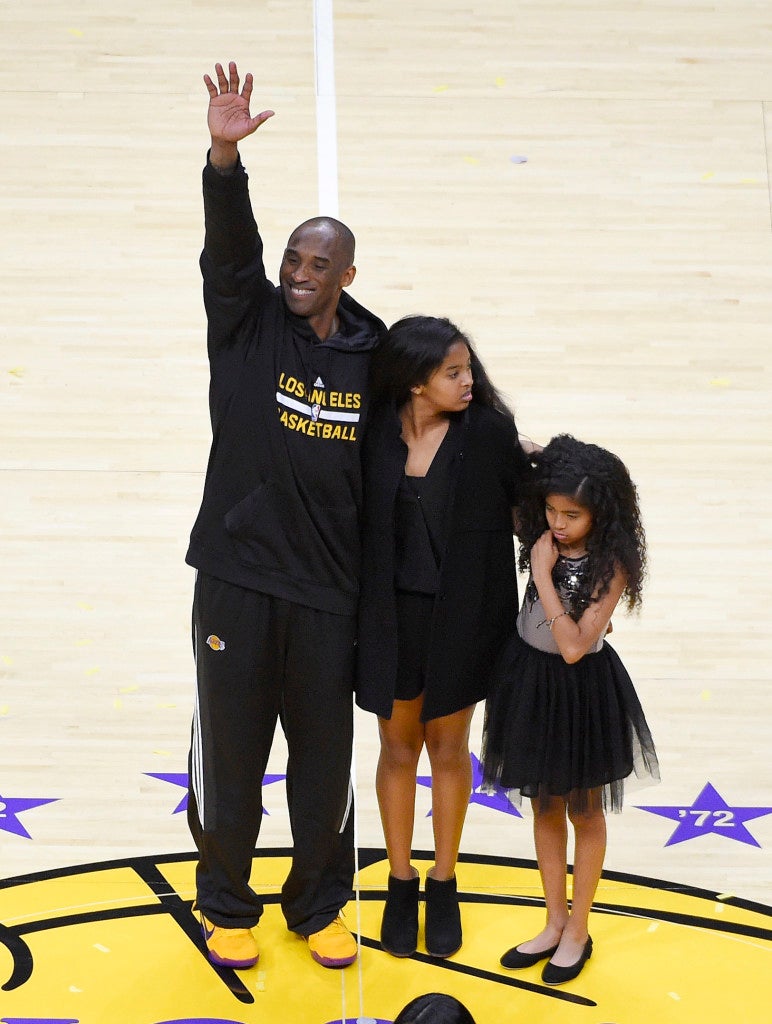 LAST HURRAH Los Angeles Lakers’ Kobe Bryant waves to fans while hugging daughters Natalia and Gianna after what he said was his final NBA game on Wednesday. Bryant scored 60 points and propelled the Lakers to a 101-96 close win against the Utah Jazz. AP

LOS ANGELES—The crowd rose to its feet with still two minutes left on the clock, ready to give its hero a fitting farewell. For years, he cut a polarizing figure in this arena and in a basketball universe that couldn’t quite agree on whether he was hero or villain.

READ: Kobe Bryant: A hero or a villain? Or both?

Kobe Bryant, Los Angeles Lakers’ superstar of two decades, was still a point short of 50 points after a trip to the line and the Lakers trailing the visiting Utah Jazz, 88-96, with 2:16 to play.

With the game providing him with one last stage to cement his greatness, here at Staples Center, there in basketball history and everywhere else in the world that was tuned in to this final match, the feeling was finally unified.

It was written in the shirt slung over arena seats for fans to wear: Love.

The roar grew even louder inside Staples Arena, which was bathed in purple and gold for the final time this season, and Bryant knew what to do next—as he had done before countless of times in his illustrious career: Take over.

And one of the most exhilarating players to ever set foot in the NBA did just that. Bryant came up with a clutch performance worthy of a legend and a storybook ending to his illustrious career after 1,567 games.

In a spellbinding shooting display, an exhausted Bryant, who had been a shadow of his former self the entire season, single-handedly towed the Lakers to their final victory of the season, 101-96, with nine straight markers.

“Tonight was about playing hard and trying to put on a show as hard as I possibly could,” Bryant told the media at the postgame press conference. “A perfect ending would’ve been winning a championship.”

Bryant may not have been able to deliver that 17th banner in his final year, but he made sure to leave the fans something to marvel for in the coming days.

“I have never witnessed anything like that before. He was exhausted with seven minutes left. I knew it, he knew it. But somehow, with sheer determination and guts, he did it. He carried the game. It’s mind-boggling,” said Lakers’ head coach Byron Scott.

The 37-year-old Bryant, whose career took a heartbreaking turn with injuries after the other, admitted as much, but drew inspiration from the thunderous chants of “Kobe! Kobe!” inside the arena.

“I’m really, really tired but the fans’ support was tremendous, and that’s what I remember the most,” Bryant said.

It was a chant that roared around the world. So loud that even Twitter bogged down at about the same time #MambaOut began trending.

“There were a lot of moments there I started to get emotional. I put on my jersey … I think  ‘OK, this is the last time.’ But then I said ‘OK, you have lock that out’ because none of that makes a difference if you come out here laying eggs,” Bryant said.

Bryant nearly choked up at probably the most fitting salute of the evening. Magic Johnson, long the Lakers’ undeniable icon, endorsed Bryant as the “greatest” to wear a Lakers jersey.

“I refuse to believe it, because Magic is my hero.”

Familiar faces like actor Jack Nicholson, a fixture in every Lakers game, came out to see Bryant play for the final time. Former Laker players like Shaquille O’Neal, Derek Fisher, Lamar Odom among others were also in attendance.

O’Neal, who paired with Bryant to take home three championship rings for the Lakers, recently challenged the five-time champion known for his sheer competitiveness, to score 50 in his final game to which Bryant answered “absolutely not.”

Whether he didn’t think he could do it or he just didn’t want to commit, it didn’t matter, because Bryant delivered 10 more than what O’Neal was asking for in a stunning showing.

“Honestly, I cant believe this actually happened. This is kinda crazy for me that it happened this way, it really is. It’s unbelievable. I’m still in shock,” Bryant, who also answered some of the questions from foreign media in Spanish, admitted.

As he passed by the halls lined with huge Lakers logo on the way to the locker room for the final time, all the emotions he had been trying to fend off from the start came rushing back, but Bryant said he only had one thing in mind as he turned his back on the deafening cheers.

For more on Kobe’s press conference, go to http://bit.ly/KobeLiveFBINQ.

READ: Bryant: I will never play in the NBA again