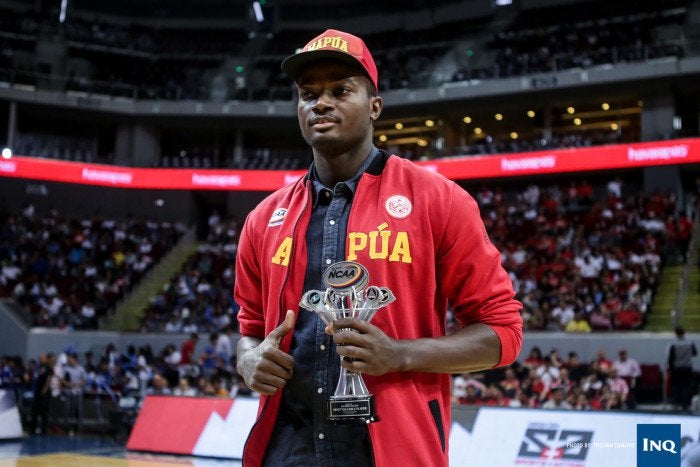 Mapua center Allwell Oraeme was officially named Most Valuable Player in the NCAA Season 92 men’s basketball tournament before Game 2 of the Finals between San Beda and Arellano University Tuesday at Mall of Asia Arena.

But despite Oraeme’s dominance in the past two years, the Cardinals still couldn’t get past the Final Four, something the defensive stalwart wants to change next year.

“I’m thankful for this but it would be more of a blessing for me if we could improve next year,” said Oraeme, who averaged 16 points, league-best 20 rebounds and 2.4 blocks. Oraeme also won the Defensive Player of the Year for the second consecutive season.

Jalalon, who led the Chiefs to their second Finals appearance in three seasons, was the only local player in the Mythical Five dominated by imports.

Nigerian big man Bright Akhuetie of Perpetual Help finished in third while a pair of Cameroonians Donald Tankoua of San Beda and Hamadou Laminou of Emilio Aguinaldo College wound up in fourth and fifth, respectively.

Tankoua made the list despite playing in only 11 games before sustaining a season-ending ACL injury.