Melee at UFC 229 after Nurmagomedov chokes out McGregor 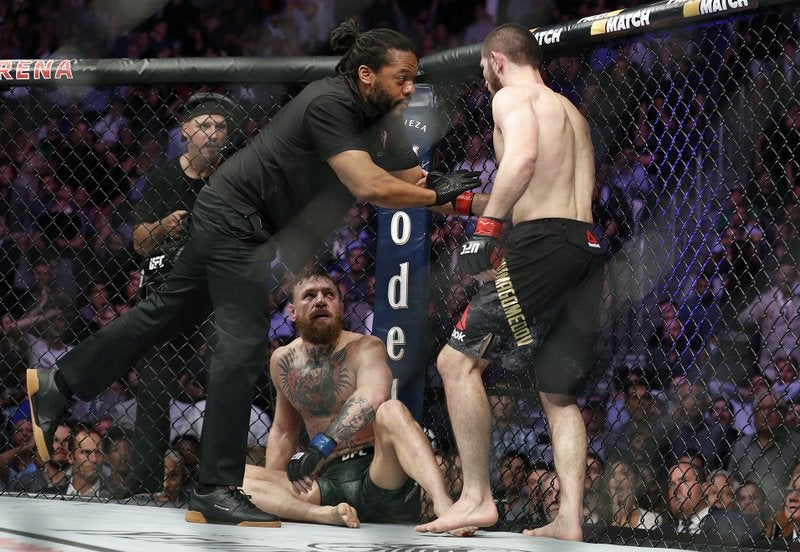 Khabib Nurmagomedov, right, is held back by referee Herb Dean after fighting Conor McGregor, bottom, during a lightweight title mixed martial arts bout at UFC 229 in Las Vegas, Saturday, Oct. 6, 2018. Nurmagomedov won the fight by submission during the fourth round to retain the title. (AP Photo/John Locher)

LAS VEGAS — Conor McGregor tapped out in the fourth round of his comeback fight at UFC 229 against Khabib Nurmagomedov, who then climbed over the cage and set off a brawl by scuffling with another fighter in McGregor’s corner on Saturday night.

The wild scene occurred after McGregor (21-4) got caught in a choke by Nurmagomedov (27-0), who defended his lightweight belt with an impressive victory over the Irish star who infamously attacked a bus carrying Nurmagomedov in Brooklyn last April.

But Nurmagomedov then exacerbated several months of hostilities between the fighters’ camps. Nurmagomedov stepped away from the prone McGregor and immediately pointed at the Irishman’s corner, shouting and throwing his mouthpiece.

The men in McGregor’s corner appeared to respond with taunts, and Nurmagomedov climbed over the fence and fought with Dillon Danis, a Bellator welterweight who trains with McGregor. Meanwhile, two men entered the cage and sucker-punched McGregor, who defended himself before security personnel separated everyone.

Nurmagomedov and McGregor both left the ring before the championship belt could be put around Nurmagomedov’s waist.

Before the post-fight madness, Nurmagomedov firmly asserted his grappling dominance over McGregor’s striking skill in the Irish superstar’s first MMA bout in 23 months. McGregor hadn’t been in a fight since losing his boxing match with Floyd Mayweather last year, and Nurmagomedov proved an insurmountably tough opponent for his comeback.

Nurmagomedov and McGregor made no secret of their mutual loathing in the past few months, and the UFC used footage of McGregor’s attack on the bus to promote UFC 229, which could be the best-selling pay-per-view card in UFC history.

Four security guards separated the fighters while they didn’t touch gloves before the bout, and Nurmagomedov went for a takedown in the opening minute while dominating the opening round.

Nurmagomedov staggered McGregor with a right hand early in the second round, but McGregor got up and landed a flying knee. Nurmagomedov made another takedown and steadily improved his position throughout a dominant round, eventually standing and raining down blows on the prone McGregor.

Nurmagomedov decided to stand and strike with McGregor in the third round, apparently unafraid of McGregor’s famed power. McGregor landed several significant shots, but Nurmagomedov took them and eventually reasserted control against the cage.

McGregor did decent work in the fourth round before Nurmagomedov got control, climbed on McGregor’s back and finally submitted the former two-division champion.