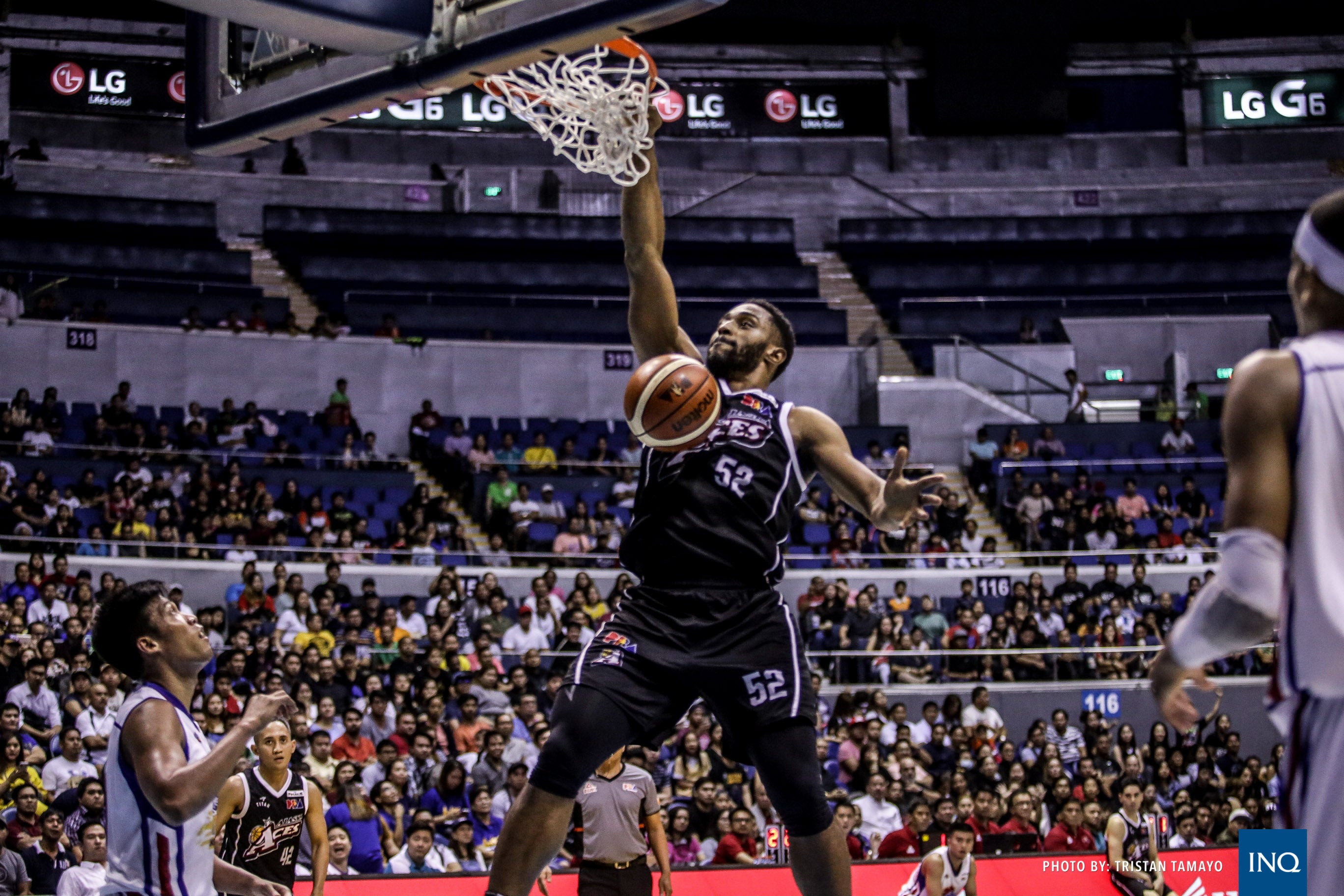 Alaska Aces’ Mike Harris dunks the ball against Magnolia Hotshots in the first half of Game 4 of the 2018 PBA Governors’ Cup Finals on Wednesday, December 12, 2018, at Smart Araneta Coliseum. Photo by Tristan Tamayo/INQUIRER.net

Alaska held off Magnolia, 90-76, in Game 4 to even the 2018 PBA Governors’ Cup Finals Wednesday night at Smart Araneta Coliseum.

Harris, who was named Best Import before tipoff, played like a man possessed for the second straight game, bullying his way to 34 points and 22 rebounds to power the resurgent Aces.

Chris Banchero, who did not let his emotions get the better of him despite getting hit by Magnolia guard Mark Barroca in the groin late in the game, also gave Alaska a big lift with 17 points, six rebounds and five assists.

Banchero had the last laugh down the stretch where he accounted for seven of the Aces’ last eight points in the last one minute and 13 seconds. He sank a triple that made it 85-73, then, buried two free throws that set the final count with 46.3 seconds left.

Alaska head coach Alex Compton was furious during the post-game interview, claiming that apart from Banchero, Harris was also “punched in the testicles.”

Despite what he thought was “dirty basketball” played by the Hotshots, Compton commended his players for keeping their cool and not retaliating.

“That’s dirty basketball. Calling it anything else would be a lie, I’m not a lier, but I’m proud of my guys because we made a deal. You have to be willing to take a punch for our team and not throw one back. If you care about the team you take a punch and you don’t throw one back. We have multiple players take punches and not throw back. That’s the way you play,” Compton said.

Compton also praised his team’s defense after limiting the fancied Hotshots to below 80 points.

“Our thought our defense was great. I don’t know the final score guys but I don’t think they got to the 80s is that right? Our guys are just playing great defense.”

The pivotal Game 5 is on Friday night still at Araneta Coliseum.

The bull-strong Harris delivered an encore of a performance after lighting up Magnolia with 36 points and 18 rebounds in Alaska’s 100-71 blowout win in Game 3 three nights ago.

Romeo Travis, who finished second to Harris for the Best Import award, had 29 points on 6-of-11 shooting from long range and 13 rebounds. Travis had the hot hand and just kept shooting even after heading back to the dugout midway through the third quarter due to a cut on the bridge of his nose.

Paul Lee, the newly-minted Best Player of the Conference, added 14 points and eight rebounds but went just 4-of-13 from the field.