Giannis Antetokounmpo scores 38, but is denied MVP in defeat 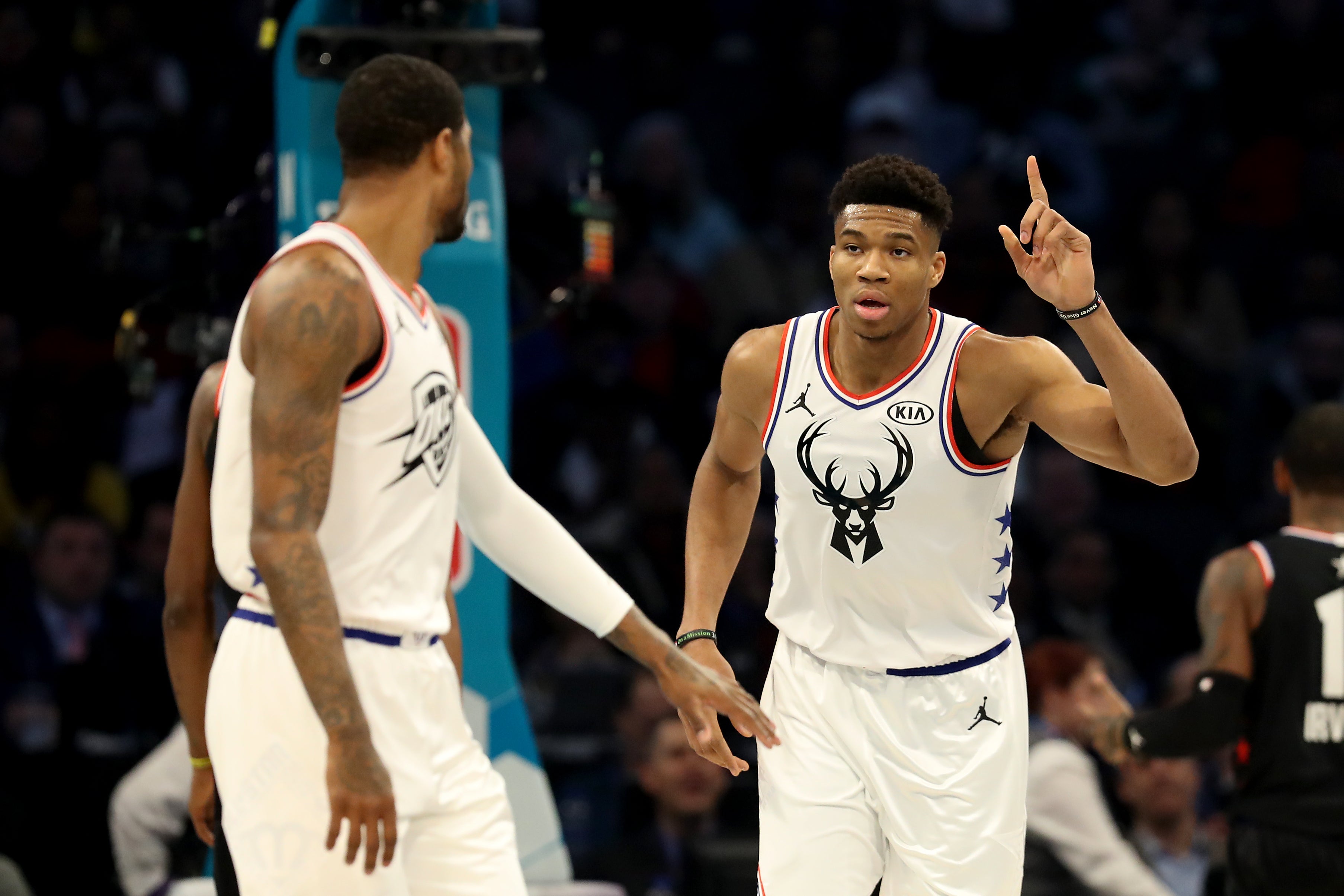 CHARLOTTE, NORTH CAROLINA – FEBRUARY 17: Giannis Antetokounmpo #34 of the Milwaukee Bucks and Team Giannis reacts against Team LeBron in the first quarter during the NBA All-Star game as part of the 2019 NBA All-Star Weekend at Spectrum Center on February 17, 2019 in Charlotte, North Carolina. Streeter Lecka/Getty Images/AFP

CHARLOTTE, N.C. — Midway through the third quarter, Giannis Antetokounmpo said he began thinking he had a chance to become the first international player to win the NBA All-Star Game MVP.

But the thought was fleeting, as Team LeBron mounted a rally and came from behind to defeat Team Giannis 178-164 on Sunday night. While Antetokounmpo finished with 38 points and 10 rebounds, Kevin Durant won the award.

“We didn’t win and that’s why I didn’t get it,” the Milwaukee Bucks star said.

He had taken some advice before the game about how to approach things from his brother, Thanasis Antetokounmpo, who has won the last two MVP awards in the Greek League.

He came out aggressive.

Antetokounmpo started the game with a dunk fest — five of them in the first quarter alone and finished with eight for the game. One dunk was a thing of beauty as he took a bounce pass from two-time league MVP Stephen Curry that sailed over the rim and dunked it.

Curry called it a play that nobody else in the gym could have made.

“His length, finishing it, and getting it before it came down. Pretty bang-bang play,” Curry said. “Just glad we had that connection. I’m not sure anybody else on the floor could have finished that one. So for it to be choreographed like that was pretty nice.”

Antetokounmpo just smiled after the play, maybe even stunned by his own athleticism.

“I’m going to keep getting better,” Antetokounmpo said. “Hopefully, I can get as many MVPs as my brother has.”

Durant doesn’t doubt that will happen.

He said the 23-year-old Antetokounmpo has “potential through the roof.”

“It is scary to see how far he can keep going,” Durant said of the 6-foot-11 Antetokounmpo. “His game is still rounding into shape and he is still getting better. But he’s in the elite top three of the MVP candidates (at 24). So, to be that young and already at the top of the class as one of the elites in the game, it is a joy to watch his progression.”

Antetokounmpo lived up to his billing as the best player in the Eastern Conference now that LeBron James has moved to the Los Angeles Lakers.

But, he said the fact that he was the team captain isn’t going to his head.

“It’s easy as long as you stay humble and down to earth,” Antetokounmpo said of handling his role as the All-Star Game team leader on Sunday night. “It’s easy. I think just being a leader of the team, it wasn’t as tough as I thought because my teammates, the guys in the locker room encouraged me to step up and take it serious and play hard and help the team to win. So that was kind of easy tonight.”