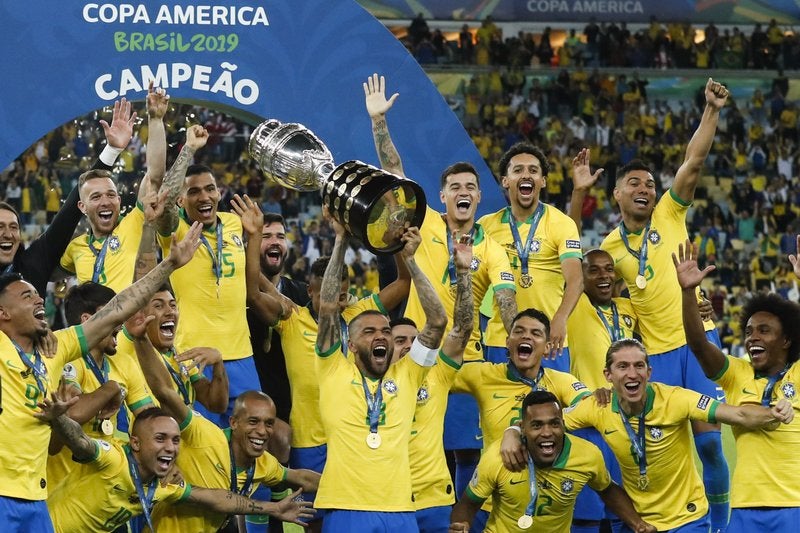 With its injured star watching from the stands at a packed Maracanã Stadium on Sunday, Brazil beat Peru 3-1 to win its first South American title since 2007.

It was Neymar’s replacement, Everton, who led the team to victory, scoring a goal and setting up another to give Brazil its ninth Copa América trophy, and fifth at home.

Gabriel Jesus and Richarlison also scored for Brazil, which has won the title every time it hosted the tournament.

“I gave everything I had today,” said Everton, who was voted player of the final and also finished as one of the tournament’s top scorers with three goals.

“Who would have thought that Everton would be playing in the final and would be named the man of the match,” Brazil coach Tite said.

Neymar, who was ruled out before the tournament because of an ankle injury, sat with his son close to Brazilian president Jair Bolsonaro among the crowd of nearly 70,000 at the Maracanã.

“Neymar is extraordinary, he’s a top 3 player,” Tite said. But “with teamwork we stayed strong.”

Brazilian fans had some reason to worry after Gabriel Jesus was sent off in the 70th minute because of a second yellow card, but Peru couldn’t pull off one last upset after eliminating Uruguay in the quarterfinals and two-time defending champion Chile in the semifinals.

“Brazil deserved the victory,” Peru coach Ricardo Gareca said. “We played better than we did in the previous match. We have improved as a team. We still have to improve more, but we are on the right track.”

Peru, which had been routed 5-0 by Brazil in the group stage and barely avoided early elimination, was trying to win its first Copa América trophy since 1975 and just its second overall. It hadn’t returned to the final since ’75.

The victory helped Brazil to regain the confidence of some supporters following its quarterfinal exit at the 2018 World Cup in Russia. It will also ease some of the pressure on coach Tite, who had been criticized for his selections and the team’s lackluster performances.

Brazil hadn’t made it past the quarterfinals of the Copa América since beating Argentina 3-0 in the 2007 final in Venezuela. It didn’t even get past the group stage in 2016.

The last time it won the Copa América at home had been in 1989, when Romário scored the winner against Uruguay at the Maracanã.

Brazil’s only other trophy since 2007 came in the 2013 Confederations Cup, also at home.

Brazil arrived as a heavy favorite but it was an even match from the start, with the hosts not being able to press too much despite being urged on by most of the crowd at the Maracanã.

Everton opened the scoring in the 15th from close range after a well-placed cross by Gabriel Jesus, who made a surging run down the right flank.

“I’m happy with the goal and with the penalty in the end,” Everton said. “I have to thank my teammates for helping me finish as a top scorer.”

The 23-year-old Everton was elevated to the starting lineup after Neymar was ruled out and his initial substitute, David Neres, struggled in the first couple of matches.

It was the only goal conceded by Brazil in six games.

Gabriel Jesus put the hosts ahead again in the third minute of first-half stoppage time with a low shot after an assist from midfielder Arthur.

Peru tried to take control after Gabriel Jesus was sent off for a hard foul on an opponent, but the visitors were not able to create many significant chances.

Brazil sealed victory when Richarlison, who had missed a few matches because of the mumps, converted a penalty kick in the 90th after Everton was fouled.

Both penalty kicks had to be delayed for video reviews.

Brazil’s veteran right back Dani Alves was voted the player of the tournament.