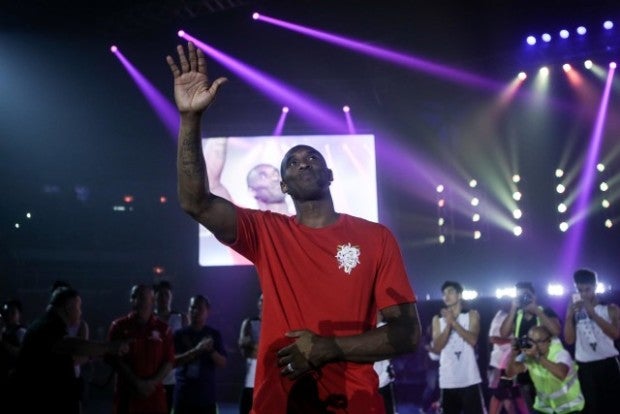 Kobe Bryant waves at the Filipino crowd at Araneta Coliseum during his Mamba Mentality Tour in Manila. Photo by Tristan Tamayo/INQUIRER.net

MANILA, Philippines — The Samahang Basketbol ng Pilipinas on Monday mourned the tragic passing of basketball icon Kobe Bryant, who died in a helicopter crash in California.

The loss of Bryant, who was with his 13-year-old daughter Gianna and seven others when his private chopper went down, was greatly felt all over the world especially in the Philippines, a basketball-crazy country which Bryant visited seven times from 1998 to 2016.

“The basketball world just lost one of its greatest sons, Kobe Bryant. Samahang Basketbol ng Pilipinas is grieved by the news, and we send our deepest condolences to his family,” the SBP through chairman emeritus Manny V. Pangilinan and president Al Panlilio, said in a statement.

“Kobe was greatness personified from the way he carried himself to the work he puts into his game — doing it with passion and with style. His handful of trips to the Philippines made him one of the most beloved NBA players among Filipino fans and we will all remember these moments fondly, especially the Smart Ultimate All-Star Weekend where he amazed us with his talent and touched us with his authentic personality.”

“Fiba and the basketball world as a whole lost one of its top ambassadors. Rest in Peace, Kobe. Thank you for showing us what it means to be a true competitor and a true sportsman.”

During his many visits in Manila, one of his most memorable trips came in July 2011 when he played with the likes of Chris Paul, Derrick Rose and Kevin Durant at Araneta Coliseum.

Bryant, the five-time NBA champion, who played 20 seasons all with the Los Angeles Lakers, visited the country for one last time in June 2016 just two months after scoring 60 points in his final game.