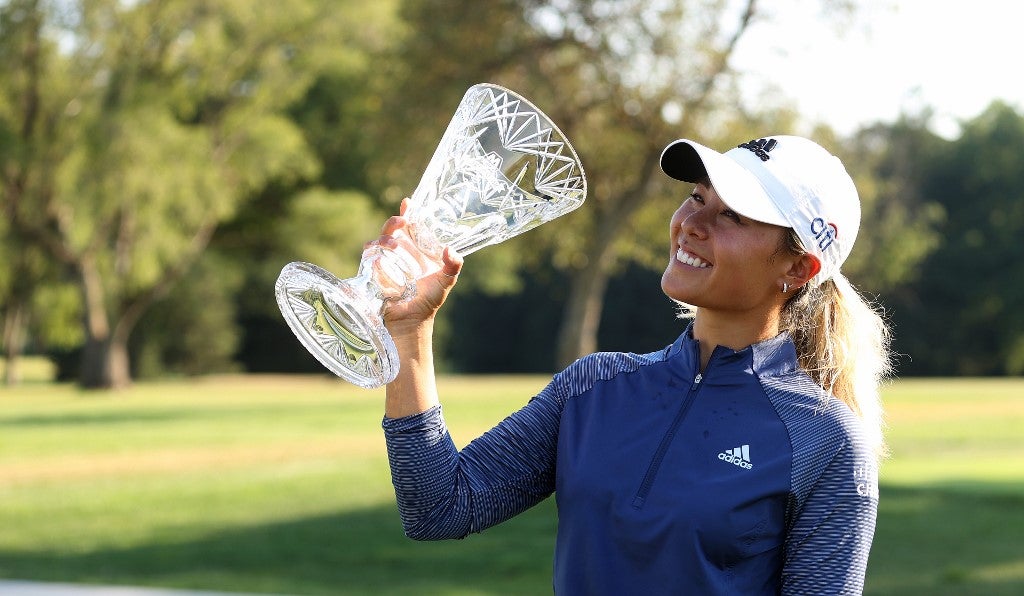 Danielle Kang celebrates with the trophy after winning the Marathon LPGA Classic during the final round at Highland Meadows Golf Club on August 09, 2020 in Sylvania, Ohio. Gregory Shamus/Getty Images/AFP

Ko, who had started the final round four shots clear, looked to be cruising to victory after opening up a five-shot lead with six holes to play at Highland Meadows in Sylvania, Ohio.

But the 23-year-old New Zealander, chasing a first win in two years, endured a nightmare finish down the stretch that included bogeys on the 14th and 16th before a disastrous double-bogey seven on the 18th.

Ko’s stumble allowed Kang to sneak in and claim victory by one shot only a week after her win at last week’s Drive On Championship in Toledo, the first LPGA event after a five-month COVID-19 hiatus.

“My caddie looked at me and said, ‘You’re right in it,'” Kang said afterward. “I looked at him and said, ‘I’m five down with six holes to go.’ I kind of liked that mentality, made some good birdies coming in and kept it together.”

Kang finished with a three-under-par 68 for a 15 under aggregate 269. Ko, meanwhile, posted a two-over-par 73 to finish tied for second alongside England’s Jodi Ewart Shadoff on 14 under.

It was a cruel finale for Ko, who had started steadily with two birdies and seven pars to reach the turn at two-under for the day.

Ko then looked to have taken a stranglehold on the contest when Kang bogeyed the 12th to fall five shots behind.

But Kang responded with back-to-back birdies on the 13th and 14th, and when Ko bogeyed the 14th after failing to reach the green in two, the five-shot deficit had been cut to just two strokes with four holes remaining.

After both players parred the 15th, Kang closed to within one on the 16th when Ko was left with a long putt to save par that lipped out.

Kang’s chances of at least forcing a playoff looked to have gone when she missed a golden birdie chance on the 17th to leave Ko one clear heading to 18.

Ko’s composure wilted, though, on the par-5 last. After hitting her second onto a cart path, Ko’s third then flew through the other side of the green.

Her fourth shot then bounced into a bunker before her fifth left her with a long putt just to make bogey, which she duly missed.

Kang, meanwhile, had recovered from finding a bunker to get up and down safely for par, sealing her victory.