The leadership of the Philippine Basketball Association (PBA) gathers on Monday for an all-important “hybrid” meeting where it will decide on what path the league will take as far as its 46th Season is concerned.

Commissioner Willie Marcial will preside over the meeting—where some of the league’s team representatives will be physically present and the others joining them via zoom—as a number of critical topics will be discussed, the biggest among them being the opening and format of the season.

Marcial said that they will set a deadline to determine whether the season will have two conferences, as initially penciled, or in the worst case, one.

“We need to have it (opening) by the last week of May at the earliest or the first week of June at the latest to have two conferences this year,” Marcial told the Inquirer over the phone even as the league continues to hope for the best as far as the COVID-19 vaccine is concerned.

“[The decision] will be easier if we’re able to procure vaccines immediately,” he said.

Finances of the league will also be discussed as it has been operating at a loss since the time the pandemic struck and crippled the sporting world, and this could include players taking a cut in pay as well as all team and league staff. 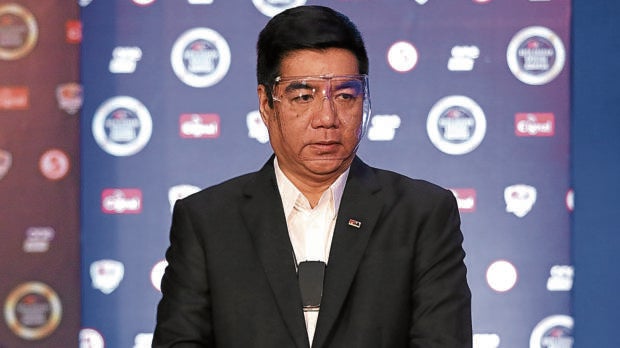 The league and its teams have soldiered on despite the pandemic by paying their staff and players in full even with just one conference played since the pandemic struck in March last year.

A bubble is also still an option, although Marcial sees this as a last resort as it is not only costly, but also takes a huge toll mentally on the players and everyone in it.

“That’s our last option,” Marcial said. “But if we will hold a bubble, it will be shorter than that one we had last year [which was for almost 10 weeks].”Marcial said that if the season opens by early June, it is likely that the Philippine Cup will only have a single round elimination. An import-laden conference, should travel restrictions ease up, is an option, otherwise, a double round PH Cup will be played as the second tournament of the year.

Opening past May could leave PBA vulnerable to another fiscal hit