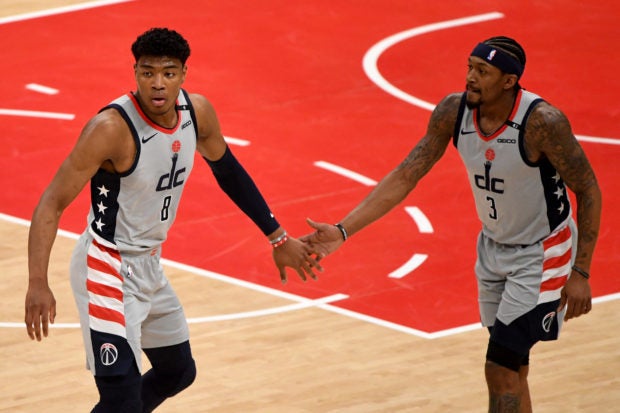 Rui Hachimura (#8) and Bradley Beal (#3) of the Washington Wizards celebrate after a play against the Indiana Pacers during the first half at Capital One Arena on May 20, 2021 in Washington, DC.   (Getty Images via AFP)

LOS ANGELES – United States – Washington showed their ability to bounce back on Thursday by rolling over the Indiana Pacers 142-115 in the NBA’s play-in tournament to grab the eighth and final seed in the Eastern Conference postseason.

Russell Westbrook and Bradley Beal were back in top form, combining for 43 points and leading a 16-0 second quarter run in the dominating win that came two days after a frustrating 118-100 loss to the Boston Celtics in the play-in opener.

“I am excited about our group,” said Wizards coach Scott Brooks. “I knew we would bounce back and I am glad we did it on both ends of the floor.

“It feels great anytime you stick together through tough times and still fight for one another. It hasn’t been easy but the easy part of it was coaching this group.”

Beal finished with 25 points and Westbrook delivered 18 points, 15 assists and eight rebounds for the Wizards, who reached the postseason for the first time since 2018 when they lost in the first round to the Toronto Raptors.

The Wizards move on to play the top seeded Philadelphia 76ers with the first game scheduled for Sunday. The loss ousted the Pacers and ended the franchise’s streak of five consecutive playoff appearances. Russell Westbrook  of the Washington Wizards dribbles against the Indiana Pacers during the first half at Capital One Arena on May 20, 2021 in Washington, DC. (Getty Images via AFP)

Beal made four three-pointers and also had five rebounds and four assists while playing 28 minutes. He sat out the final quarter of the one-sided game to rest his strained left hamstring.

Washington shot 58 percent from the field but they busted the game open with a 16-0 run in the second quarter that the Pacers never recovered at Capital One Arena in Washington.

The score was tied at 34 -34 early in the second when the Wizards went on their run. Robin Lopez scored six points during the burst.

“That was a difficult part,” Pacers coach Nate Bjorkgren said of the second quarter. “When you give this team confidence, they play very well. We had a hard time with them this year.”

The Wizards finished the regular season as one of the hottest teams in the league by winning 17 of 23. They won all four games against the Pacers this season, averaging 139.7 points.