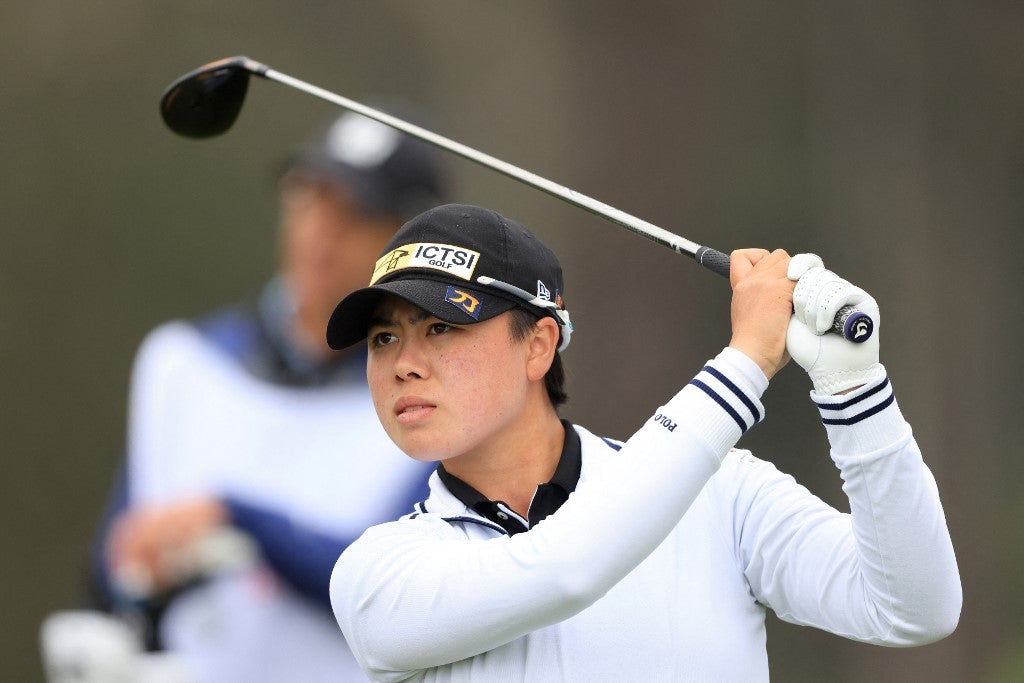 Yuka Saso of the Philippines hits her tee shot on the fourth hole during the second round of the 76th U.S. Women’s Open Championship at The Olympic Club on June 04, 2021 in San Francisco, California. Sean M. Haffey/Getty Images/AFP

SAN FRANCISCO – Philippine teenager Yuka Saso fired six birdies in a four-under par 67 on Friday to seize a one-shot lead over former champion Lee6 Jeong-eun at the halfway stage of the US Women’s Open.

Saso, 19 and a two-time winner on the Japan LPGA tour, rolled in a long birdie putt at her final hole, the par-three eighth on the imposing Lake Course at Olympic Club, to finish 36 holes at six-under par 136.

She walked off the course with a two-shot lead, but Lee6, whose only LPGA tour title is her 2019 US Open triumph, stormed home with four of her five birdies on the back nine in a four-under 67 for 137.

Philippines’ Yuka Saso leads the way after Round 2 in just her 3rd #USWomensOpen  appearance! 📹: @uswomensopen

Saso is playing just her third major, but she has experience to draw on of contending on the LPGA tour. She held a two-shot lead through 36 holes at the Lotte Championship in April.

“Stay patient and enjoy,” she said of the lesson she’ll take into the weekend, along with the confidence of a strong performance on the challenging par-71 layout that has hosted five men’s US Opens but had never before hosted a women’s major.

“I hit good shots from the rough today and holed a couple putts,” she said.

Philippines’ Yuka Saso birdies her final hole and is the clubhouse leader at 6-under. She is the first to 6-under at @TheOlympicClub #USWomensOpen  📹 @LPGA

She said the key to hitting out of the dense rough at Olympic was to not try to do too much.

“First, if I go in the rough, my mindset is just to go for the fairway,” she said. “I mean, it’s really long and, like, sticky, so yeah, it’s really hard to get on (the green) from it.

Lee said there was no real secret to her back nine birdie burst.

“Oh, just I feel good with my shots, and my putting was good, the speed,” she said.

“I’m definitely satisfied with my results. I got only one bogey and I made five birdies.”

Megha Ganne, the 17-year-old amateur who shared the overnight lead with England’s Mel Reid, held her own in the damp, chilly weather that made the course even more daunting, carding an even par 71 for a share of third on 138 alongside Megan Khang (70).

Yuka Saso leads the 76th @uswomensopen heading into the weekend at @TheOlympicClub. ⛳️

China’s Feng Shanshan was a further stroke back after a 70 for 139.

Reid settled for a two-over 73 to join a group on 14 along with world number two Park In-bee, who shot a 69, and Lexi Thompson, who posted a 71.

“It was tough today,” Reid said after a round that included three bogeys in her last five holes and four bogeys overall. “It was cold. Didn’t hit it as good today.

“I just was struggling to kind of rotate a little bit,” she added of back trouble that flared up in the cold. “A little bit of a disappointing finish, but you’re going to have a stretch of four or five holes like that in a major where you just have to grind out pars, and I did the best I could, but in a great position going into the weekend.”