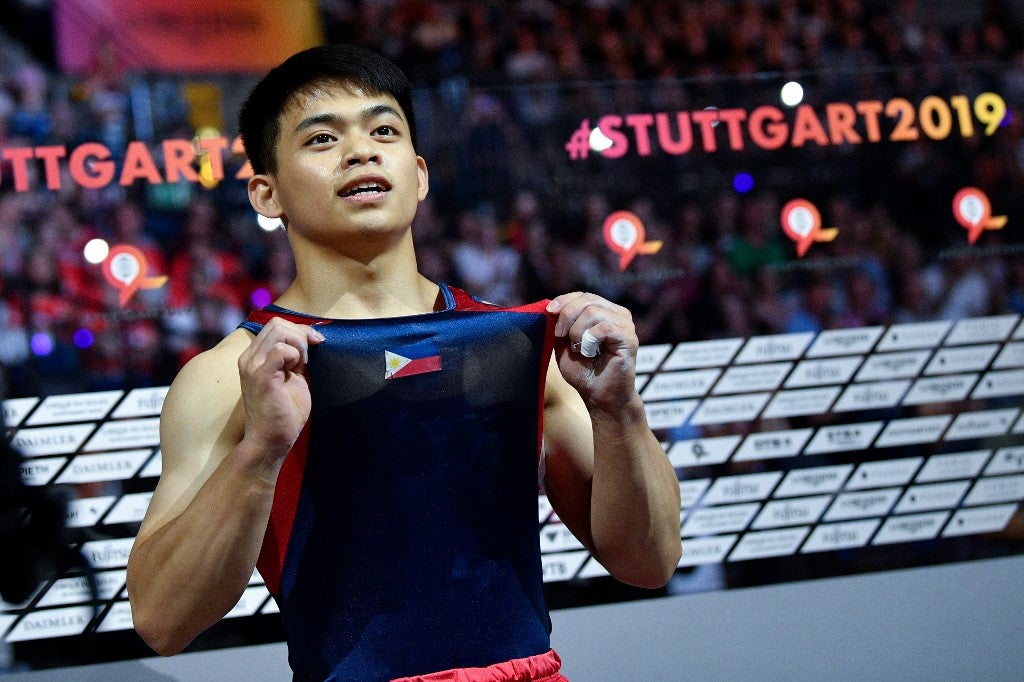 MANILA, Philippines–Carlos Edriel Yulo is projected to wear the sparkling gold medal around his neck in the floor exercise of the men’s artistic gymnastics in the Tokyo Olympics.

The world champion Filipino gymnast likewise targets at least a silver medal in the vault and a finals appearance in the parallel bars.

These twin feats alone would make the 21-year-old Yulo, who has been training in Japan over the past four years under the tutelage of coach Munehiro Kugimiya, the most accomplished Filipino athlete in the Olympics.

Yulo, discovered by the gymnastics association at the age of seven in a playground near the Rizal Memorial Sports Complex in Manila, ruled the floor exercise at the 2019 World Artistic Gymnastics Championships in Stuttgart, Germany.

“In all the videos of him that I have seen, his training is perfect. If he does perfectly well in competition as he does in training and without deductions, I know he can do it,’’ said Carrion, who predicted a gold in the floor, silver in the vault and a stint in the medal round of the parallel bars.

The Philippine Olympic Committee treasurer confided that she’s not expecting Yulo to go up the medal podium in the all-around event and other apparatuses—pommel horse, high bars and rings—where Russian Nikita Nagornyy is seen as the strongest contender.

“I just hope and pray that he doesn’t get injured. Caloy’s mind, emotions and skills have all been strengthened. He is so calm when you talk to him. It’s me who gets really nervous with the Olympics fast approaching,’’ said Carrion.

The Philippine Sports Commission has been helping defray the expenses of Yulo since he was offered a scholarship program by the Japan Olympic Association back in 2016, including Yulo’s Japanese coach, physiologist and psychologist.

Yulo will first go through the qualification and ranking rounds on July 24 and expects to see action in the all-round finale on July 28 and the finals of the individual apparatuses on Aug. 1-3 at the Olympic Gymnastic Centre in Tokyo.

After receiving the first dose of his Pfizer vaccine last month, Yulo will be fully inoculated next week against the dreaded COVID-19 virus.

“To tell you the truth, for me I don’t want him vaccinated (with just a few weeks left before the Olympics). But (International Gymnastics Federation president Morinari) Watanabe told me that if Caloy is positive, he will no longer be allowed to compete. That’s why I agreed,’’ said Carrion.

So positive is Carrion that Yulo will strike gold in Tokyo that she already asked the PSC to help them secure exemption cards from the government to spare Yulo and Kugimiya the long quarantine protocol upon their return to the Philippines.

“Just in case something happens in the floor (exercise), at least he’s also good in other apparatuses that he can win,’’ said Carrion, who organized a musical and entertainment fund-raiser on July 15 at the Dusit Hotel for the training of the national gymnastics team.

Carlos Yulo wins bronze in Japan ahead of Tokyo Olympics