Giannis Antetokounmpo #34 of the Milwaukee Bucks is congratulated by Khris Middleton #22 while coming to the bench for a time out against the Phoenix Suns during the second half in Game Five of the NBA Finals at Footprint Center on July 17, 2021. Christian Petersen/Getty Images/AFP

Giannis Antetokounmpo finds it harder to focus and stay in the moment with the Milwaukee Bucks on the verge of their first NBA title in 50 years.

The 26-year-old Greek star forward, a two-time NBA Most Valuable Player, can move beyond past playoff failures and win his first crown with a victory in Tuesday’s sixth game of the NBA Finals at Milwaukee.

“It means a lot,” Antetokounmpo said. “But I can’t get too carried away. I have to stay in the present. I can’t worry about the outcome.

“We know what the deal is. It’s one game away from being an NBA champ, being in the history of this game, being always there. Nobody can take that away from you. It’s going to be big.”

The Bucks lead the best-of-seven showdown 3-2 and can win their first crown since 1971 before a noisy sellout crowd with 25,000 more people packing the “Deer District” and watching on screens outside the arena.

“It’s going to be amazing to do it in front of our fans,” Antetokounmpo said. “But there are more steps until we get there.

🌍 The PLAY heard around the WORLD! 🌏

Announcers all over the globe call Jrue Holiday's clutch steal and alley-oop to Giannis! #ThatsGame pic.twitter.com/uBpcOpQXBT

“When the game starts, we have to take it a possession at a time and hopefully we can be in a position to win.”

“We’ve really just got to lock in, not get too high, not get too low,” Holiday said. “You’ve got to give it your all. At this point there’s no excuses.”

Antetokounmpo led the Bucks to the NBA’s best record the previous two seasons only to see Milwaukee make disappointing playoff exits, dropping four in a row to Toronto in 2019 and losing to NBA runner-up Miami in 2020.

“What we’ve been through the last couple years, it has prepared us to be in this moment,” Bucks coach Mike Budenholzer said. “It’s just part of our journey and we’ve still got a ways to go.”

Antetokounmpo stresses the work yet to come.

“We have to enjoy the moment,” Antetokounmpo said. “But the job is not done. We have to realize that. We have got to stay in the present.

Past playoff failures have taught the Bucks to be champions, Milwaukee’s Pat Connaughton said.

“When adversity hit in the playoffs, we weren’t able to really get through it,” he said.

“Throughout these playoffs, when adversity has hit, we’ve come together even stronger. We’ve had each other’s backs. That’s what championship-caliber basketball is all about.”

The Bucks could become only the fifth team to win the title after losing the first two games of the finals, joining the 2016 Cleveland Cavaliers, 2006 Miami Heat, 1977 Portland Trail Blazers and 1969 Boston Celtics.

The rare feat would put Antetokounmpo among some of the NBA’s greatest legends, including LeBron James, Shaquille O’Neal, Dwyane Wade and record 11-time champion Bill Russell.

“We don’t stop,” Antetokounmpo said. “Usually when you’re down 0-2, you stop competing in a way. But this team, we don’t do that. We keep coming, keep competing.” 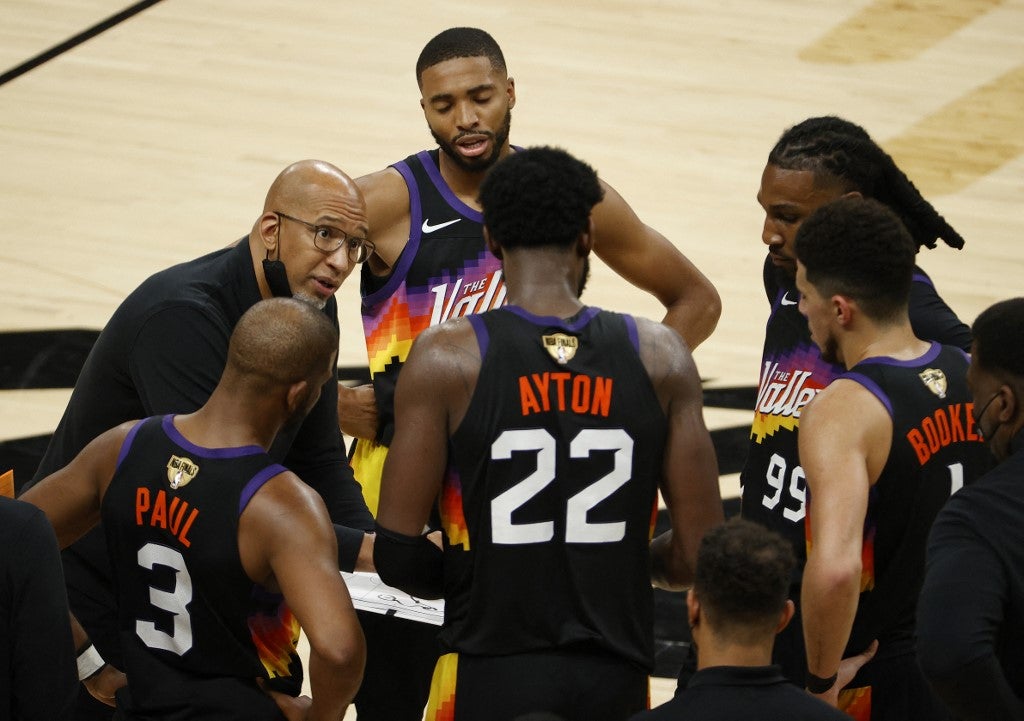 Head coach Monty Williams of the Phoenix Suns huddles his team during a time out against the Milwaukee Bucks during the second half in Game Five of the NBA Finals at Footprint Center on July 17, 2021 in Phoenix, Arizona. Christian Petersen/Getty Images/AFP

The Suns, who dropped game five at home on Saturday, must win Tuesday to force a winner-take-all seventh game Thursday at Phoenix.

“Pressure is a privilege,” Suns coach Monty Williams said. “As hard as it is, this is what you want. You’re not going to find greatness on a beach. You’re going to find it in the struggle.”

The Suns chase the first title in their 53-year history.

“If you sulk about it, in the blink of an eye the season is going to be over,” Phoenix forward Mikal Bridges said. “So, we’ll learn from it. We know what we have to do. We’re ready, man, just do or die.”