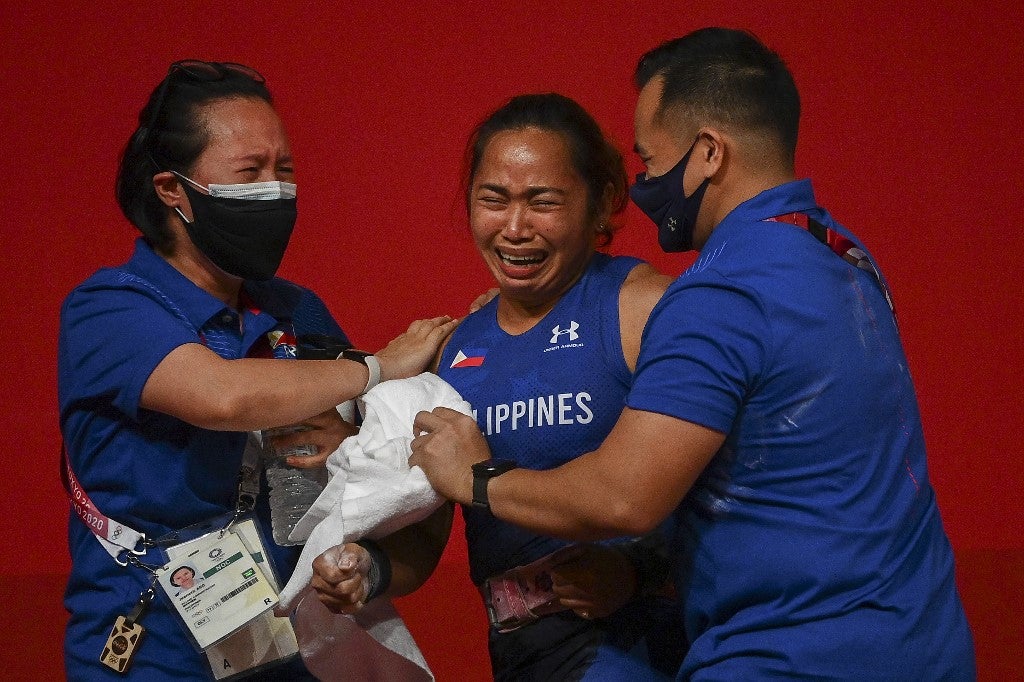 Philippines’ Hidilyn Diaz (C) reacts after placing first in the women’s 55kg weightlifting competition during the Tokyo 2020 Olympic Games at the Tokyo International Forum in Tokyo on July 26, 2021. (Photo by Vincenzo PINTO / AFP)

TOKYO — After setting two Olympic records and claiming the women’s 55-kilogram weightlifting crown, Hidilyn Diaz earned her gold medal, the country’s first in nearly a hundred years of participation in the Summer Games.

For Diaz, however, the glory wasn’t all her own but also belonged to “Team HD,” the support group behind her incredible journey, which included — to the surprise of many outside sporting circles — a Chinese coach.

On top of that team is Chinese “sage” Gao Kaiwen, who Diaz credits a lot for her improvement.

“In terms of experience, he’s what the team needs,” said Dr. Karen Trinidad, the star athlete’s sports psychologist. “He’s the wise man. There’s a certain foundation and stability in him.”

With the help of the Philippine Sports Commission (PSC), Diaz first tapped Gao’s services after ruling her division in the 2018 Asian Games.

“I use a lot of modern techniques in terms of what we do for her programming. So a lot of times, we adjust depending on what her weaknesses are. We … found that we really worked well together to devise a program to improve her weaknesses. Another thing it does is it prevents any injuries. Luckily, coach Gao’s really good at finding ways to taper the program or just taper intensity if there needs to be adjustments to be made.”

Gao’s role in Diaz’s victory was highlighted by the Chinese ambassador to the Philippines, Huang Xilian, in a social media post on Tuesday.

“Truly humbled to see that a Chinese coach has helped in making this historic win happen for the Philippines,’’ the diplomat said. “Aside from trade and investment, China and the Philippines have had numerous cooperation in many fields and athletics is just one of them.’’

According to PSC Chair William Ramirez, Gao was hired only after Monico Puentebella, president of the Philippine Weightlifting Association, asked for a foreign coach to help its athletes improve on the sport’s technical aspects.

“It was through the initiative of Monico,” Ramirez told the Inquirer. “And the PSC then evaluated all that was needed before hiring him.”

Puentevella, who came home from Tokyo together with Diaz on Wednesday night, said in a separate interview that no one should take anything away from what she had just accomplished.

Although Huang mentioned other members of Team HD, not a few piqued netizens saw the irony of having a Chinese coach for an athlete cheered by a nation with hot-button issues with Beijing, especially the West Philippine Sea dispute and the Duterte administration’s leanings toward Chinese loans and aid.

But obviously, none that mattered to Diaz herself. “He’s someone who is very positive and that helps me,” she said of her coach.

Trinidad, the sports psychologist, is in charge of boosting Diaz’s emotional and mental strength—her self-belief.

Jeaneth Aro checks Diaz’s diet meticulously, plotting and charting her weight progression down to a tenth of a kilogram.

“[T]he training of coach Gao and coach Julius was aligned with the meal plan of Miss Jeaneth,” Diaz said.

“Each of us has equal say,” said Trinidad. “We are all synced. Because if one of us doesn’t do his or her task well, then Haidee’s performance will suffer. If what is being discussed is crucial, we would ask coach Gao.’’

Only when the four handlers were deadlocked on certain matters that they let Diaz join the decision-making process.

Read Next
Nesthy pounds foe for at least a bronze as PH assured of multiple medals for first time since 1932
EDITORS' PICK
House energy committee chair Arroyo bats for cheap electricity
Honolulu Café is the cure for your Egg Tarts and Roastings cravings
OVP: Pilot’s claim vs Robredo ‘never happened’, a ‘malicious fabrication’
Petition to reverse Comelec decision on Bongbong Marcos’ DQ case reaches SC
Luxe property: A way to build, preserve wealth
PH detects local transmission of Omicron subvariant BA.2.12.1
MOST READ
Heart Evangelista gets a ‘no’ from Chiz Escudero after asking, ‘Do I deserve a bag?’
CebuPac places pilot under disciplinary review after ‘baseless’ post vs Robredo
Man posing as Marcos spox revealed to be an inmate in Bilibid — Guevarra
Closure order vs Megaworld Corp halted as firm vows cooperation with BIR – exec
Don't miss out on the latest news and information.