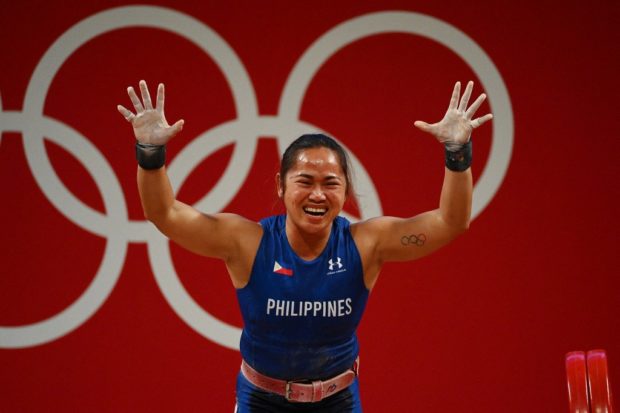 Philippines’ Hidilyn Diaz reacts after placing first in the women’s 55kg weightlifting competition during the Tokyo 2020 Olympic Games at the Tokyo International Forum in Tokyo on July 26, 2021. (AFP)

“Yes, napatawad ko. Napatawad ko,” Diaz said in an interview on ANC when asked if she has forgiven the Palace for linking her the so-called oust-Duterte matrix back in 2019.

Asked if she would have wanted Malacañang to issue an apology, the weightlifting champ said: “For me now, hindi na. Para sa akin OK lang, kasi at the end of the day, mas kailangan ko yung peace of mind ko.”

(For me now, it’s no longer needed. For me it’s OK, because at the end of the day, what I need is my peace of mind

(As long as I move forward and I did my best to serve and represent the country, I’m happy.)

Diaz also said she has forgiven those who have bashed her, saying her historic victory can also be credited to the trials that she faced.

(After winning the gold medal, I said, I have to forgive all the people who bashed me, who threatened me. That was my down moment but I realized that it made me stronger as an athlete.)

(I became more determined, and I loved the Philippines even more, that’s why I’m also thankful to them. If I did not face those trials, I don’t think I’ll be a gold medalist today.)

Diaz flew back to Manila Wednesday  and received a hero’s welcome at the Ninoy Aquino International Airport.