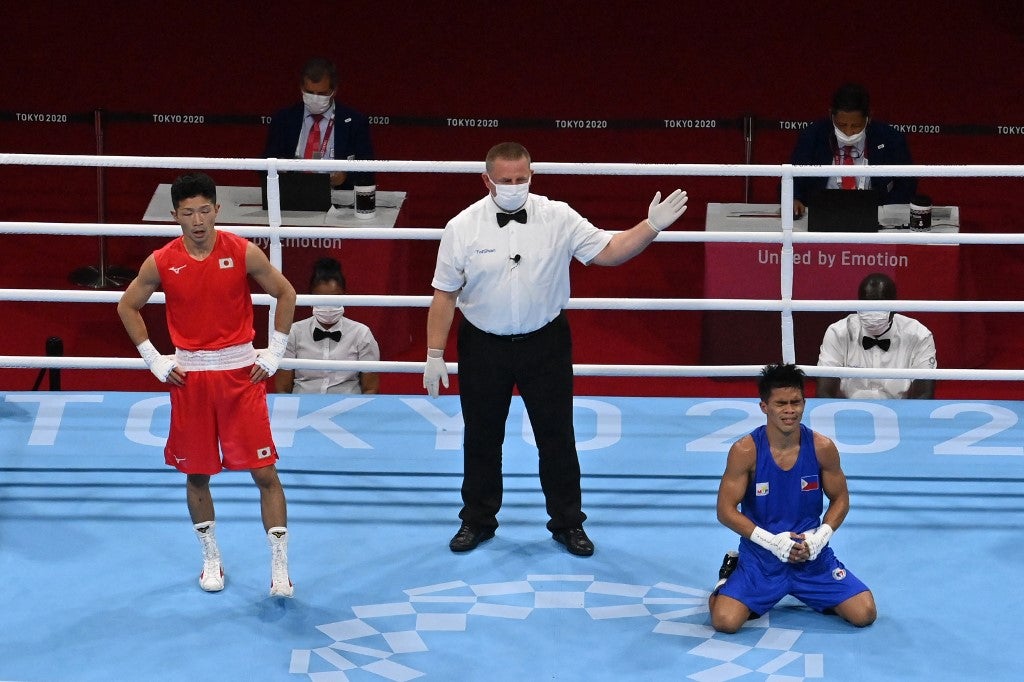 Philippines’ Carlo Paalam celebrates after winning against Japan’s Ryomei Tanaka after their men’s fly (48-52kg) semi-final boxing match during the Tokyo 2020 Olympic Games at the Kokugikan Arena in Tokyo on August 5, 2021. (Photo by Luis ROBAYO / AFP)

From scavenging in the streets of Cagayan de Oro just to make ends meet, Paalam is now on the cusp of Olympic gold glory.

Paalam earned a shot at a gold medal after serving a masterclass to dominate hometown bet Ryomei Tanaka in the men’s flyweight semifinal of the Tokyo Olympics Thursday at Kokugikan Arena.

He also assured himself of a silver medal following his 5-0 victory. The final against Great Britain’s Galal Yafai is on Saturday, Aug. 7, at 1:00 p.m.

“I’m asking for prayers again from my fellow Filipinos. I will do my best because my opponent is really strong. I just have to trust myself and I hope the Lord gives it to us.”

Paalam, 23, who drew a 30-27 score from four judges and a 29-28 from the other, remained as the lone Filipino pug in contention for the gold as Eumir Marcial lost in the men’s middleweight semifinal shortly after.

The Bukidnon-born Paalam, who was introduced to boxing at nine years old in Cagayan de Oro, aims to become the Philippines’ first ever boxing gold medalist.

The Philippine boxing team already has a silver courtesy of Nesthy Petecio at women’s featherweight and a bronze in the men’s middleweight from Eumir Marcial.

From Coke as prize to aiming for Olympic gold: Carlo Paalams’s boxing journey