Filipinos remain one of top NBA viewers for 2020-2021 season 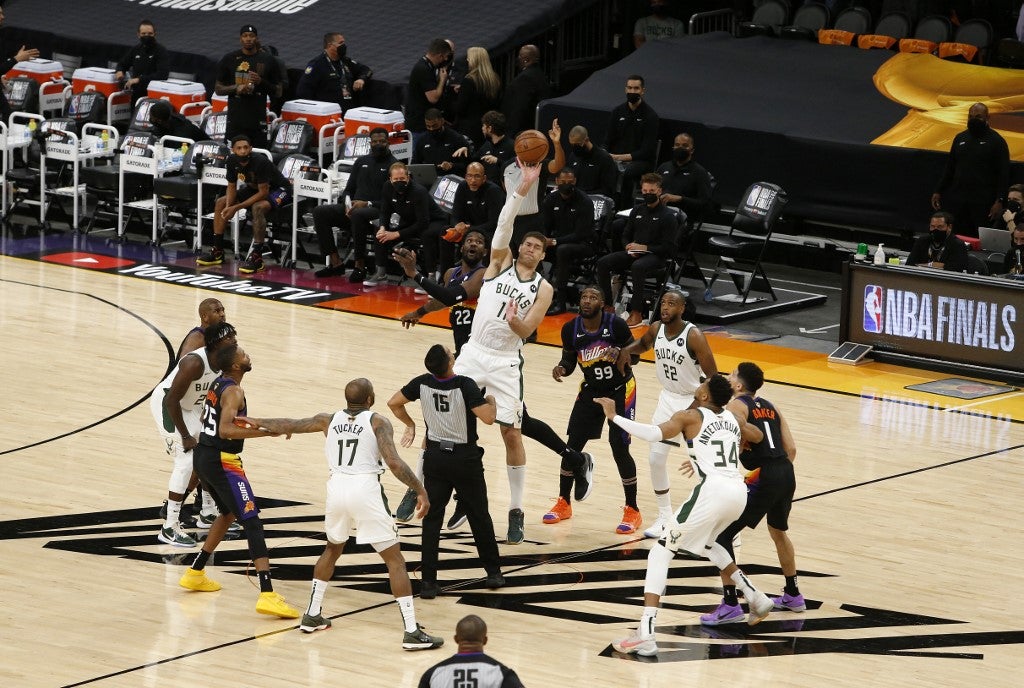 FILE–Milwaukee Bucks and the Phoenix Suns tip off during Game Two of the NBA Finals. Ralph Freso/Getty Images/AFP

MANILA, Philippines–The basketball-loving country of the Philippines remains one of the top consumers of NBA content across all platforms for the 2020-2021 season.

According to the numbers released by the NBA, the Philippines is the first country outside of the United States with the most unique viewers per game on television at 8.4 million during the 2021 Finals between the Phoenix Suns and Milwaukee Bucks.

The Bucks ended a 50-year NBA title drought for Milwaukee.

There was also over a 21 percent year-over-year growth in average audience for live Playoff games broadcasted across TV5 and One Sports.

“Filipinos are among the most dedicated NBA fans in the world, and their continued engagement across TV, social media and retail has contributed to the league’s incredible growth in the Philippines,” said NBA Asia Managing Director Scott Levy. The country also tripled its average NBA Christmas Day audience for 2020 with the TV5 broadcast of the Los Angeles Lakers-Dallas Mavericks game drawing the largest average audience across all international markets.

Free TV isn’t the only area the Philippines had a lion’s share of the pie as Filipino viewers ranked no.2 in NBA League Pass subscriptions in the Asia-Pacific region.

Across the league’s social media platforms, the NBA estimated a combined 24 million followers on Facebook, Instagram, Tiktok from the Philippines–the most of any country outside of the US.

On Youtube, Filipino fans consumed more than 37 million hours–one-third of the total channel viewership– of NBA content from the league’s official channel during the season.

The NBA highlighted the continued growth of the Filipino viewership as the league enters its 75th season, which tips off next month.

“As we embark on our 75th Anniversary Season, we look forward to working with our partners to build on this momentum by providing fans in the Philippines with new and exciting ways to experience the NBA through digital innovations and customized content.”

No matter who makes the NBA finals, Filipino fans will tune in