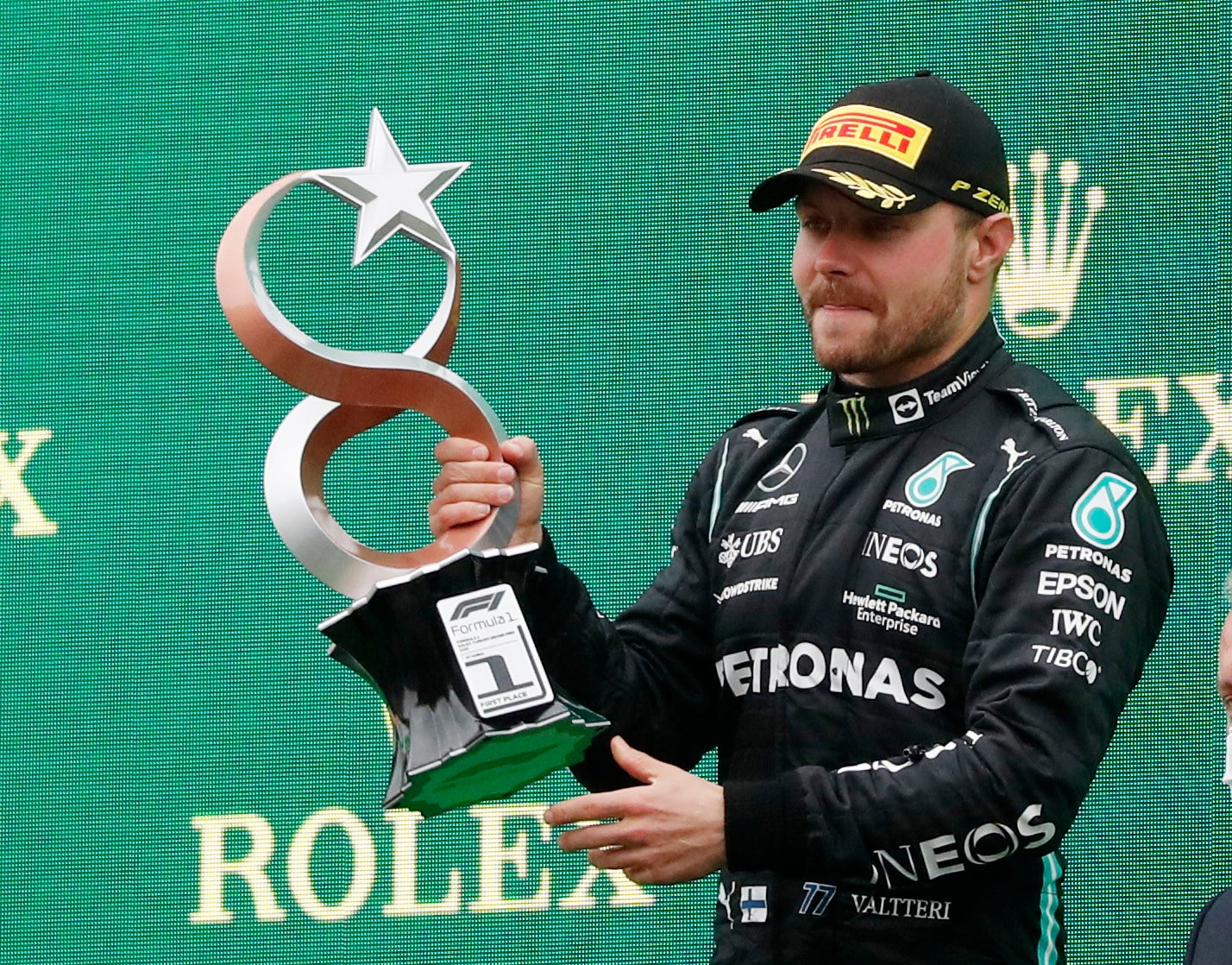 A commanding drive from the Finn 💪#TurkishGP 🇹🇷 #F1 pic.twitter.com/6zYnpxyww5

Verstappen, 24, was runner-up and 14.584 seconds behind the Finn at a wet Istanbul Park to overturn a two-point deficit to Hamilton and go six points clear with six races remaining.

Red Bull teammate Sergio Perez finished third with Ferrari’s Charles Leclerc fourth and ahead of seven-time world champion Hamilton, who had started 11th due to an engine penalty.

“It’s been a while but feels good. I think from my side probably one of the best races I’ve had ever,” said Bottas, who started on pole position and took a bonus point for fastest lap.

“Apart from that one little slide, everything was under control.”

The victory, sealed by overtaking Leclerc 11 laps from the end after the Ferrari driver had taken the lead by staying out while others pitted, was the Finn’s first since Russia in September last year and 10th of his career.

Verstappen, who started on the front row, had a quiet race and said it had all been about tire management.

“I’m happy to be on the podium. I think it’s been close the whole year and I’m pretty sure in Austin it will be a good battle with Mercedes, so we just have to keep pushing, keep trying,” he said.

The US Grand Prix in Texas is the next race on Oct. 24.

Hamilton might have been on the podium but Mercedes called him in for a late stop from third place for a fresh set of intermediate tires with the track drying.

“Why did we give up that place? We shouldn’t have come in, man. Massive (tire) graining. I told you,” said the angry Briton in heated radio exchanges as he realized he had lost two places in the pits.

With laps running out and running P5, Lewis Hamilton wonders about the wisdom of pitting for a new set of inters #TurkishGP 🇹🇷 #F1 pic.twitter.com/60FezdEXw7

He noted afterward that Alpine driver Esteban Ocon, who finished 10th, had made his one set of tires last the entire race.

Had he stayed out and kept third, Hamilton would be only a point behind Verstappen.

"I feel like I should have stayed out" @LewisHamilton reflects on Mercedes' race strategy at Istanbul Park#TurkishGP 🇹🇷 #F1 pic.twitter.com/Lmp7QYl135

“We thought we could finish third without stopping or, if a dry line emerged, maybe going to a soft tire,” said Mercedes team boss Toto Wolff.

Pirelli boss Mario Isola said the tires would have been absolutely on the limit had Hamilton tried to last the entire race on them.

Spaniard Carlos Sainz was voted driver of the day for going from the back of the grid, due to power unit penalties, to eighth for Ferrari.

The start was clean but Gasly dropped from fourth to fifth after contact with Alpine’s Fernando Alonso, who spun.

The Frenchman was handed a five-second time penalty but Alonso also collected a similar sanction for a later clash with Haas’s Mick Schumacher.

Bottas was 1.6 seconds clear after three laps with Verstappen complaining soon after that he had problems with the gear shift.

He passed Stroll a lap later, with Norris and Gasly taken in quick succession.

A worrying moment came at the halfway mark when he was lapping Haas rookie Nikita Mazepin only for the Russian to move across the track, the two cars avoiding contact but Hamilton losing time in his chase of Perez.

Hamilton and Perez went wheel-to-wheel through four corners as they fought for fourth, with the Mexican forced to run the wrong side of a bollard marking the pitlane entry as he held position and his team applauded.

With Ferrari finally recognizing Leclerc had run out of tires after Bottas passed him, the Monegasque pitted and was overtaken by Perez.