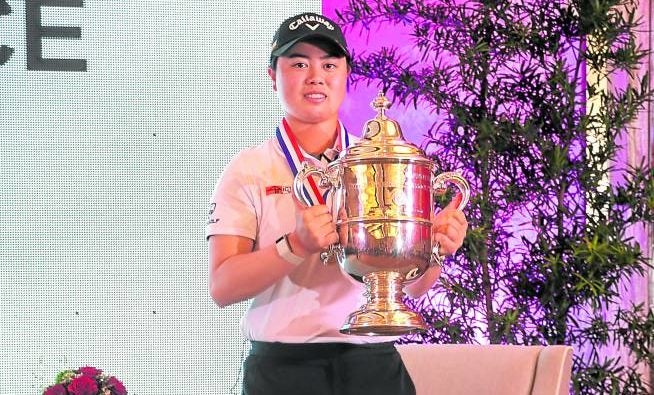 Yuka Saso poses with her US Open trophy during a press conference. —FRANCIS T.J. OCHOA

MANILA, Philippines–Seated in front of bright lights, cameras and video-snapping mobile phones, Yuka Saso looked comfortable facing the media on Monday, laughing and bantering with journalists in her first face-to-face interaction with them since the pandemic.

Stripped of the screen behind which she used to field questions from faces in boxed squares, Saso felt at home in the press conference set up by longtime sponsor ICTSI to mark her return after a long while to visit relatives before hopping back to two LPGA tournaments in Singapore and Thailand.

If she had any doubts how she would be received in light of her decision to opt for Japanese citizenship and forever end her career as a Filipino national athlete, they melted away by the time some of the media reintroduced themselves to her with anecdotes of when they last met and asked questions on things like her love life.

“I’m too young for that,” she laughed. “I’m really focused on my career right now.”

She is also in between nationalities right now, harnessing the power of her Japanese passport and having the Japanese flag beside her name during tour events without disassociating herself officially from her Filipino roots. It helps that the coming Asian Games, where defending champion Philippines could cross clubs with Japan, doesn’t allow pros to compete, meaning the nearest time Saso could play against her other home country could be in the 2024 Olympics in Paris.

And that allows her to soak in her dual citizenship, even if she has to recognize just one.

“I’m super thankful for the Filipino fans and the Japanese fans who are supporting me,” the 20-year-old Saso said. “For people who understand my situation, I’m just happy with the support that I get.”

And that situation is her career as a touring professional. Japan has one of the most powerful passports in the world, free of the cumbersome and time-swallowing visa requirements that burden the Philippine passport.

“Time management is very important for us athletes … because we travel a lot,” said Saso, doubling down on her reason in choosing Japanese citizenship. Saso added she still keeps her Philippine passport. “It’s just I had to choose [Japanese citizenship] for my career.”

Saso represented the Philippines in the 2018 Asian Games, where she dramatically led a two-gold haul despite trailing by two shots going into the final hole (she crushed that one with an eagle) and the Filipino girls trailing by nine at some point in the final round. She also competed in the Tokyo Olympics where she finished a fighting 10th, her medal chances waylaid by a caddy change right before the first round of the event.

“I do not regret anything [during the Olympics],” Saso said when reminded that had it not been for a poor start, she would have been in contention for a podium finish.

As she spoke to journalists, it was her US Women’s Open trophy that was displayed beside her. That the trophy was her last major piece of hardware as a Filipino athlete hardly made Saso wax sentimental.

That’s because she will always consider herself a person of two lineages.

“I’ll do my best to make everybody proud,” Saso said, referring to her motherlands.

“I’ll be forever Filipino and Japanese. That will never change,” she said. “Even though I represent Japan now, that doesn’t mean I’m not Filipino anymore. Hopefully, they don’t forget that.”