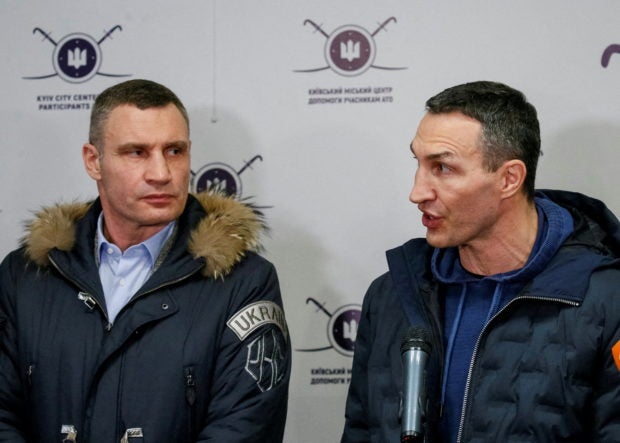 Ukrainians have nowhere to retreat and will defend their homeland from Russian invaders, Kyiv mayor and former heavyweight boxing champion Vitali Klitschko told Reuters from the capital city on Thursday.

Flanked by his heavyweight boxing star brother Wladimir, Klitschko spoke via Skype as Russia’s invasion of Ukraine entered its second week. Moscow was shelling several Ukrainian cities as its main assault force remained at a halt north of Kyiv.

“Thousands, already tens of thousands are killed in this war against Ukraine. And this number will unfortunately only grow,” said Klitschko, speaking from a shelter he is working from in Kyiv.

“We are not going to surrender. We have nowhere to retreat.”

He said about a half of the city’s 3 million people had left. Authorities had also evacuated many orphans to Poland and Germany, he said.

“The situation is tense, people are worried,” he said, adding projectiles were constantly “hitting residential blocks or important infrastructure sites.”

“The city needs peace and peaceful skies… Kyiv residents have been in their basements non-stop for a week now because of air raid alarm going off all the time.”

With empty streets, some food shortages and pharmacies closed, Kyiv was still faring better than Ukraine’s north-eastern city of Kharkiv, heavily shelled by Russia, or the southern port of Mariupol, encircled and left without power or water.

Klitschko said Russia was trying to surround Kyiv as well and called on Russians to challenge President Vladimir Putin.

“You are an instrument at the hands of one man with one ambition – to resurrect the Soviet Union… For ambitions of one man, we are paying a very high price.”

Putin said his “special military operation” was meant to protect Russians persecuted in Ukraine, a former Soviet republic that now wants to join NATO and the European Union.

The boxing brothers, whose mother is ethnically Russian, said Ukraine was always home to Ukrainians, Russians, Jews and other religions and ethnicities.

“It’s senseless. There is no reason to attack Ukraine,” said Wladimir, describing footage of bomb damage in the city of Kharkiv as weighing heavily on people’s minds.

The mayor’s younger brother said he spent the last week helping to move food and medicines around the city.

“You don’t know if you’re going to make it through the day tomorrow. Those nights, hearing explosions all night long and shooting in the street, that does make you feel worried.”

He called for the severing of all international business ties with Russia now and the imposition of more sanctions after Europe, the United States and other countries cut links with Russian banks and businesses in retaliation for the invasion.

“We’re really counting hours here,” said Wladimir Kitschko. “We have no time. We need to act now, we need to stop this madness. All the money that Russia is getting is being used to buy lethal weapons that are killing Ukrainians.”