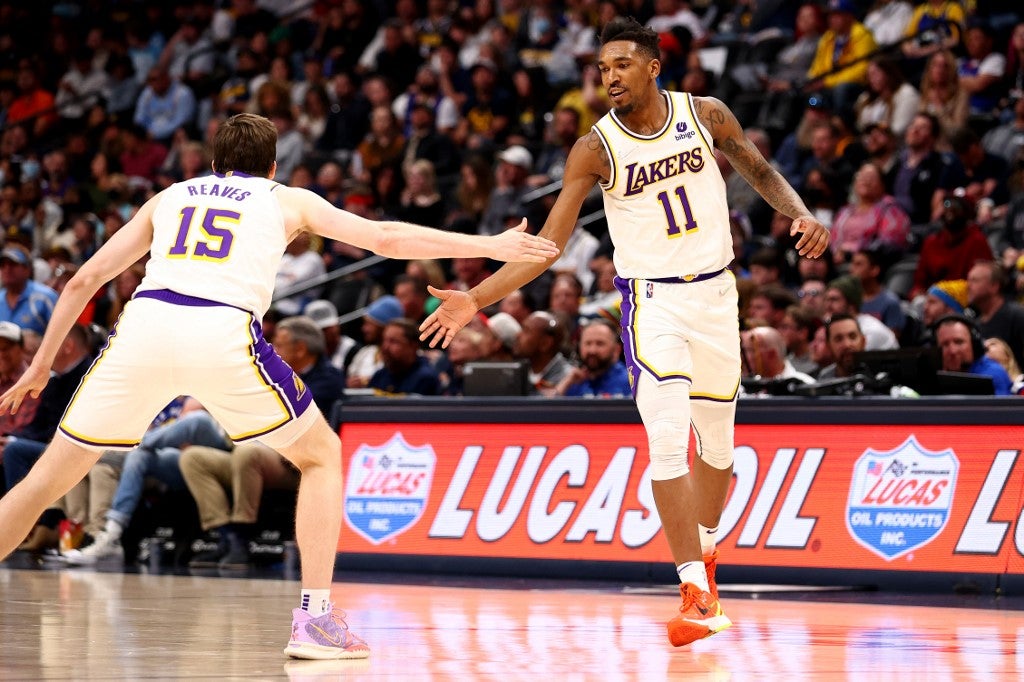 Austin Reaves established career highs of 31 points, 16 rebounds and 10 assists and excelled in overtime as the Los Angeles Lakers overcame a 17-point fourth-quarter deficit to record a 146-141 victory over the host Denver Nuggets on Sunday night.

Malik Monk scored a career-best 41 points and made seven 3-pointers for Los Angeles (33-49), which won its second straight game following an eight-game slide to end one of the most disappointing seasons in NBA history. Wayne Ellington had 18 points in a game that was contested primarily with second and third teamers.

Career nights for Austin Reaves and Malik Monk as the @Lakers win an OT thriller!

Markus Howard scored a career-high 25 points and Bryn Forbes added 24 points for the Nuggets (48-34), who are the sixth-seeded team in the Western Conference and will meet the third-seeded Golden State Warriors in the first round of the playoffs.

DeMarcus Cousins and Bones Hyland each added 17 points for Denver, which missed its final 12 field-goal attempts, including all eight in overtime.

Reaves scored seven straight Lakers’ points in overtime, including a 3-pointer to give Los Angeles a 142-137 lead en route to the comeback win.

Jeff Green added 16 points, Davon Reed had 14 and JaMychal Green tallied 11 for Denver, which made 49 percent of its shots and was 15 of 47 from 3-point range.

Stanley Johnson scored 15 points, Wenyen Gabriel added 14 and Talen Horton-Tucker had 10 for the Lakers, who shot 46.8 percent and made 16 of 43 from behind the arc.

The Lakers’ final lead in regulation was 74-73 after two free throws by Johnson with 10:25 left in the third quarter.

Forbes converted a four-point play to give the Nuggets a 91-80 advantage with 5:15 left in the quarter.

The Nuggets led by 11 with 3:21 left before Los Angeles’ late burst to force the extra session.

Monk scored 17 first-half points for the Lakers in a game that was tied at 69 at the break.

Read Next
NBA: Klay Thompson scores 41 as Warriors rip Pelicans, secure 3rd in West
EDITORS' PICK
A laptop that maximizes your WiFi so you can maximize your productivity
In Borongan, nuns play hoops (not mahjong)
Powered by style, innovation and passion
House energy committee chair Arroyo bats for cheap electricity
PH resumes talks with China on Chinese-funded transport projects
Why Tagle is a leading papal contender
MOST READ
Imee Marcos bares illegal importation of white onions
Why Tagle is a leading papal contender
Zubiri on SRA mess: Shameful, disgusting
Ogie Alcasid positive for COVID-19: ‘We keep ourselves protected and yet inabot din’
Don't miss out on the latest news and information.