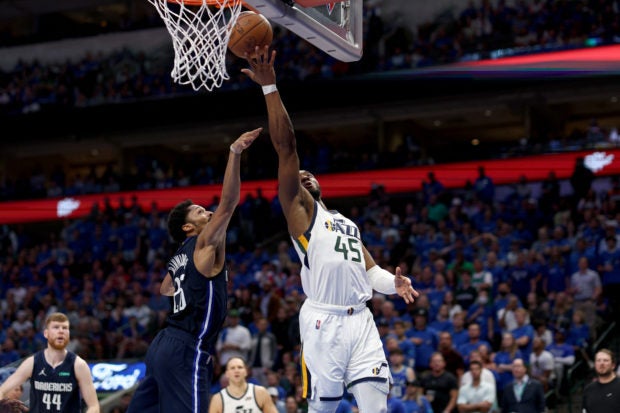 Donovan Mitchell of the Utah Jazz drives to the basket against Spencer Dinwiddie of the Dallas Mavericks in the fourth quarter at American Airlines Center on April 16, 2022 in Dallas, Texas.  (Getty Images via AFP)

SAN FRANCISCO – Donovan Mitchell scored 30 of his 32 points in the second half and the Utah Jazz held off Luka Doncic-less Dallas 99-93 in an NBA playoff game on Saturday.

Bojan Bogdanovic added 26 points while French center Rudy Gobert pulled down 17 rebounds as the Jazz seized a 1-0 lead in the first-round best-of-seven series with the road triumph.

Dallas, missing All-Star guard Doncic due to a left calf strain, pulled within 92-91 in the final seconds before Royce O’Neale made his only basket of the game, a 3-pointer with 57 seconds remaining, and Mitchell added four final free throws to secure the victory.

“Our mental toughness was challenged and we responded,” Jazz coach Quin Snyder said. “We kept our aggression. That’s key no matter what you are playing.

“Look at Royce O’Neale’s 3. He hasn’t made a shot in the game and he doesn’t hesitate to take that shot. That’s the mindset our team has right now. We faced adversity and that’s what it takes to get through it.”

Mitchell began the game 0-for-6 and 1-for-9 from the floor but sparkled in the second half. 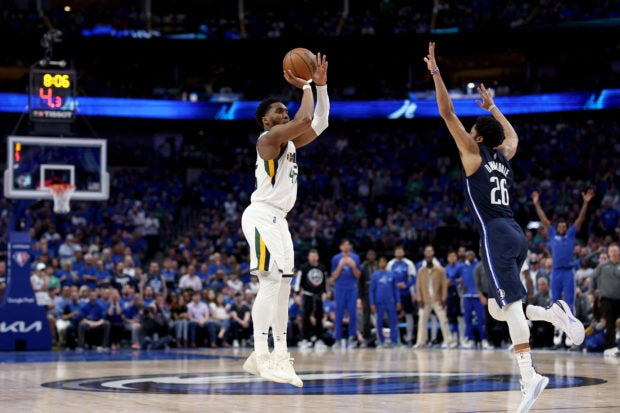 Donovan Mitchell  of the Utah Jazz shoots the ball against Spencer Dinwiddie of the Dallas Mavericks in the fourth quarter at American Airlines Center on April 16, 2022 in Dallas, Texas.  (Getty Images via AFP)

“Just be in attack mode,” Mitchell said of his halftime change. “I came out a little too passive in the first half.”

The Jazz can seize a commanding 2-0 series lead with a Monday victory at Dallas, with Doncic uncertain to play.

“We have a lot of confidence,” O’Neale said. “We have the guys we need to make a long run. It’s about us staying locked in.”

Utah outrebounded the Mavericks 53-34 with Gobert dominating inside.

“(It was) physicality,” Gobert said. “We made plays all over. We just made things hard for them. They were physical. We had to match that.”

Jalen Brunson led Dallas with 24 points and Spencer Dinwiddie added 22 for the Mavericks.