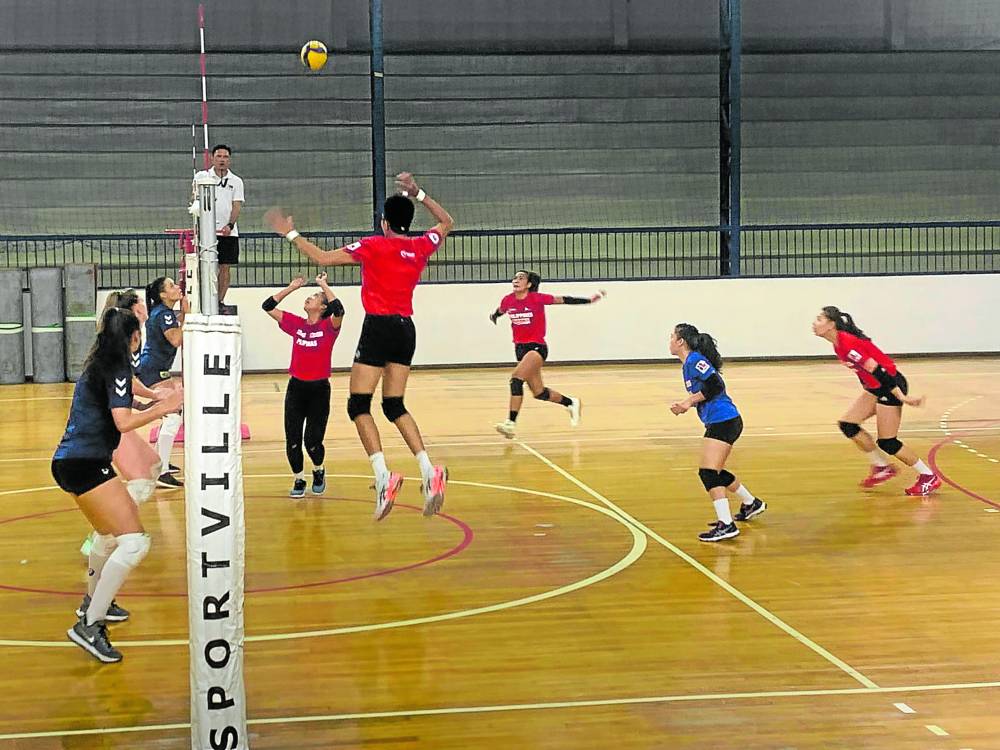 The Philippine team competes in a scrimmage with a local Brazilian club.—JUNE NAVARRO

BARUERI, BRAZIL—Jaja Santiago recognizes the urgency of getting everybody on the same page before the Philippine national women’s volleyball team embarks on its gold hunt in the 31st Southeast Asian (SEA) Games.

And the nation’s towering middle blocker assures that the demands could be met even if the luxury of time isn’t on their side.

“We only have three weeks left to work it out and there are still many areas in our game that need to be polished,’’ said Santiago, who starred during the team’s tuneup against the Barueri Volleyball Club’s (BVC) under-21 squad.

The PH spikers are already in the halfway mark of their two-week training camp here with an upward trajectory of progress after several intense practice sessions and three tuneup matches against competitive Brazilian clubs.

Aside from the BVC under-21 team, the Filipinos also toppled the Sesi Sorocaba on Tuesday after dropping their match against Sao Caetano last week, a day following their arrival from a 36-hour flight from Manila.

Head coach Jorge Edson Souza de Brito admits there remains plenty of specifics that the team needs to focus on despite the super tight timetable.

Women’s volleyball in the SEA Games in Hanoi, Vietnam, gets going on May 12 with five teams—defending champion Thailand, host Vietnam, Malaysia, Indonesia and the Philippines—going for the podium.

“We came [to Brazil] to build on the connections and things that we lack, and I’m confident that in time we will achieve this,’’ said Santiago, who played for the Saitama Ageo Medics in Japan’s V.League before joining the team in a layover in Istanbul, Turkey.

“It will not be quick and we have to be patient; but when the SEA Games arrive, we’ll be ready,’’ added the Chery Tiggo star on her third SEA Games following stints for the national team in 2015 Singapore and 2017 Kuala Lumpur.

The road to the gold medal in the SEA Games or at least the climb onto the podium will not be easy, but the highly talented core of team captain Aby Maraño, Alyssa Valdez, Jema Galanza, Ces Molina, Mylene Paat and Santiago are moving in the right direction.

“This training is important, it allows us to undergo a high level of competition that will help us a lot in the SEA Games. I’m here to help and share my experiences in Japan for the benefit of our team,’’ said Santiago.