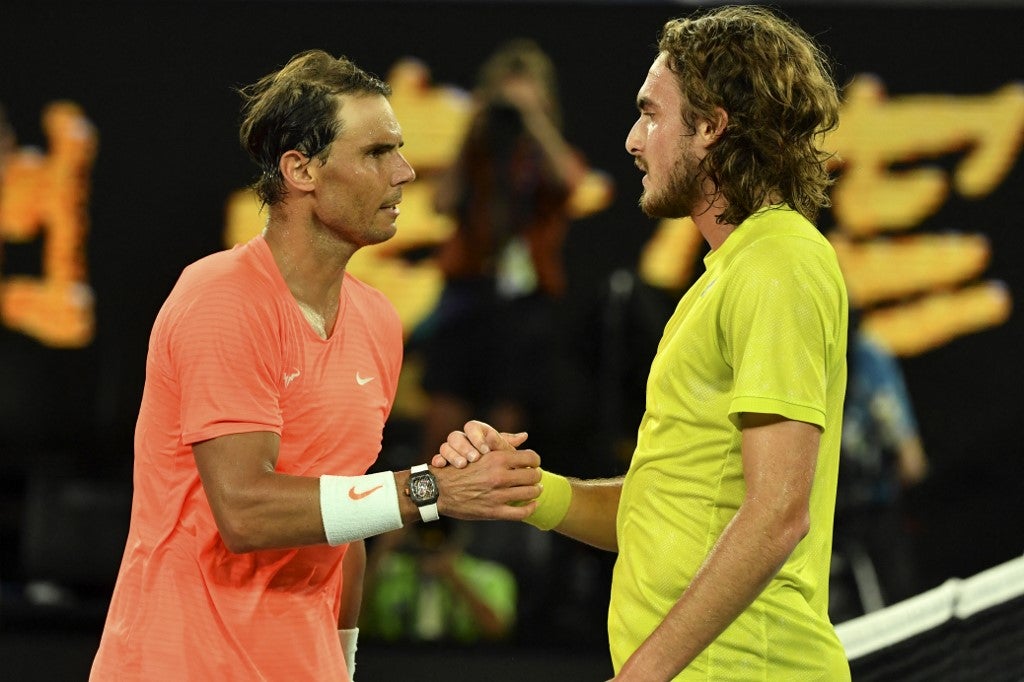 FILE – Greece’s Stefanos Tsitsipas (R) and Spain’s Rafael Nadal greet each other after their men’s singles quarter-final match on day ten of the Australian Open tennis tournament in Melbourne on February 17, 2021. (Photo by Paul CROCK / AFP)

Stefanos Tsitsipas believes Rafael Nadal must feel “immortal” after winning the French Open and moving halfway to the first men’s calendar Grand Slam in more than half a century.

The great Spaniard captured a 14th title at Roland Garros earlier this month to add to the Australian Open he secured in January.

His win in Paris, which also extended his Grand Slam record to 22 titles, came despite him needing his injured left foot to be anesthetized.

“I have a lot of respect for what he did at the French Open, playing with that foot. It was a broken foot in a way. It kind of makes him feel like he’s immortal with the things he’s able to pull off,” said Tsitsipas.

“The matches, the level of intensity he’s able to reach in times where it’s very uncomfortable, it would be uncomfortable for most players to compete under these conditions physically.”

Nadal goes into Wimbledon, which starts on Monday, claiming he is pain-free for the first time in a year and a half after undergoing treatment to cure nerve pain in his troublesome foot.

Tsitsipas believes that Nadal, the champion at the All England in 2008 and 2010, has a psychological edge if rivals believe the Spanish star is often just one injury away from retirement.

“We’re used to seeing Rafa not being able to play and win multiple Grand Slams or tournaments,” added the 23-year-old.

“That’s where I think the opponents need to be more careful. When he says he can’t play and has foot problems, that’s where I feel he’s the most threatening in terms of his performance.

World number six Tsitsipas arrives at Wimbledon with a first grass-court title under his belt having triumphed in Mallorca on Saturday.

Now he needs to translate that form to the All England Club where he has fallen at the first round three times in four visits.

That included 2021 when he was knocked out in straight sets by Frances Tiafoe.

“Last year was difficult for me. I didn’t play a single match before Wimbledon on grass. I was trying to play on grass like I did on clay, which was a huge mistake,” he admitted on Sunday.

“Technique-wise, tactic-wise, it all fell apart. Looking back last year, I watched a few videos, highlights. You want to analyze as much as possible, get to see your weak points. None of it made sense.”